US Working With Iraqis, Kurds to Ensure Proper Vetting of People Fleeing Mosul 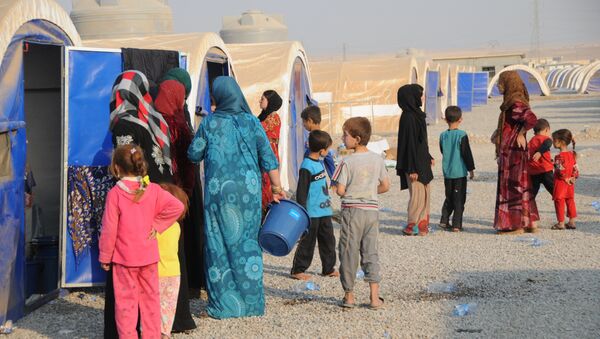 The United States is closely cooperating with Iraqi and Kurdish officials to ensure proper vetting of refugees fleeing Mosul, a senior US official told reporters on Monday.

WASHINGTON (Sputnik) — On October 17, Iraqi Prime Minister Haider Abadi announced the start of the operation to retake Mosul, which has been occupied by Daesh terrorists since 2014. The offensive has resulted in liberation of large territories and prompted many terrorists to flee Iraq.

“We are working closely with them to make sure that screening is appropriate, that it’s done by government officials, that it’s at planned sites, that it’s standardized, that it’s open to international monitoring, that it’s transparent, humane,” the official said.

Iraqi Army Discovers Mass Grave With 100 Beheaded Bodies Near Mosul - Reports
The administration official noted that they have also deployed mobile protection, legal aid teams, and are establishing protection service centers, particularly in those areas where families are most likely to flee from Mosul. The official also said that they have enough shelters in place.

“What we are seeing right now is that about 50 percent of the people are able to get shelter, and 50 percent need to be provided shelter,  we are working with our humanitarian partners to get these shelters in place,” the official explained.

“We think, and again early days, we think that there will be more than enough shelters in place to meet the needs for a million people by mid-November,” the official added.