Trump: FBI Move Not to Prosecute Clinton for Emails Makes US 'Laughing Stock' 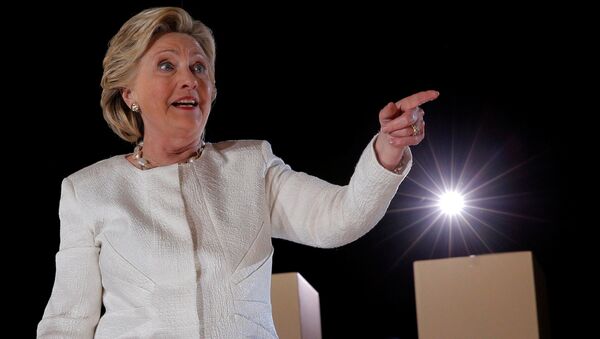 The FBI’s recent decision in a new probe into Democratic nominee Hillary Clinton's use of a private email account during her tenure as US secretary of state damages the reputation of the United States around the world, Republican candidate Donald Trump said at a rally in Sarasota, Florida.

WASHINGTON (Sputnik) — On Sunday, FBI Director James Comey announced the agency would not recommend criminal charges against Clinton over her use of a private email account and server after reviewing new evidences.

"With what's happening with our justice, our country is a laughing stock all over the world," Trump told his supporters at a Monday rally. "What’s happening is a disgrace."

US Republicans to Further Probe Clinton Emails Scandal - Official
Trump suggested that Washington continued to protect Clinton. The Republican nominee encouraged his supporters to "deliver justice" with a ballot on Election Day.

"The system is rigged, at least we know it, people have never known it so obviously as they do now," Trump added.

The White House press secretary said Monday that President Barack Obama remains confident in Comey's ability to run the FBI, given the criticism he has been subjected for closing twice the investigation after numerous critics have asserted there is ample evidence to criminally charge Clinton.

On October 28, Comey informed the US Congress in a letter about the reopening of the previously closed probe into Clinton's use of a private server, when a new batch of potentially critical emails were discovered in an unrelated investigation.

US citizens are set to elect the 45th president of the United States on Tuesday.