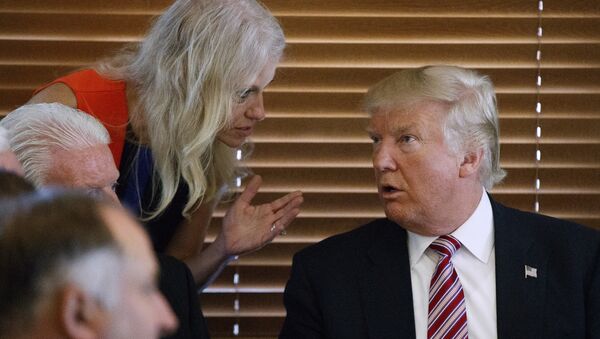 Trump: Rank, File FBI Agents Won't Let Clinton Escape Punishment for 'Crimes'
On November 6, FBI Director James Comey said that the re-opened investigation, in which new emails found on a device belonging to a top aide were investigated, only led the agency to uphold its decision not to file charges against Clinton. The original investigation against Clinton regarding her use of a personal server for classified emails was concluded in July.

Later that day, Trump's campaign manager, Kellyanne Conway, told MSNBC that the FBI "mishandled" the issue of the former secretary of state's use of a private email system during her tenure "from the very beginning."

Conway said she doubted it was possible for the agency to carefully look through a vast number of emails in such a short period of time.

"Do you think they went through hundreds of thousands of emails in a week? Because that might strike a lot of Americans as unusual," she said. "I don't know if I'd have the capacity to do that. I don't know if I'd want, as a taxpayer, the FBI to stop everything that they're doing for a week to do that, and I doubt they did, because they are responsible men and women."

She noted, however, that the FBI's decision would hardly impair Donald Trump's chances to become the next occupant of the Oval Office, as the emails scandal never was the centerpiece of his campaign, though campaign officials were "asked about it constantly."