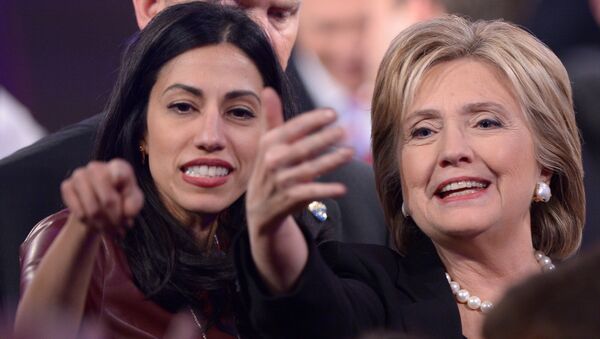 © AFP 2021 / MANDEL NGAN
Subscribe
Hillary Clinton and her top lieutenant Huma Abedin supported the Muslim Brotherhood and other Islamist groups during the time when they ran the State Department as part of a US strategy going back 60 years, US analysts told Sputnik.

WASHINGTON (Sputnik) — Abedin has been accused of having ties or sympathy for the Muslim Brotherhood and other extremist Islamic groups that rose to power or influence while she worked for Hillary Clinton at the State Department from 2009 to 2013.

"There are a lot of stories going around about Huma Abedin as a Saudi-Muslim Brotherhood plant, but the truth is much more alarming," Middle East analyst and political commentator Dan Lazare said.

Abedin is now widely expected to become White House chief of staff if Clinton is elected US president next Tuesday.

"The United States has pursued a consistent pro-Muslim Brotherhood, pro-Salafist policy since the opening days of the Cold War."

Successive US administrations had followed this policy to maintain the long-standing US-Saudi alliance, and because they believed in the Muslim Brotherhood as a counterweight to Communist or radical-nationalist influence in the Middle East, Lazare explained.

If Hillary Wins: These People May Play a Role in Clinton's Administration
Also, the CIA had held a long-standing belief in Central Asia as the soft underbelly of the Soviet Union, Lazare added.

"What better way was there to destroy the Soviets than to encourage Islamic fundamentalist penetration or subversion from within? Washington was interested in jihad long before the Saudis were."

However, this policy hit a significant setback when al-Qaeda carried out the September 11, 2001 terrorist attacks that killed nearly 3,000 US citizens, Lazare acknowledged.

"But we know what happened next: The Saudi-Salafist angle was hushed up while blame was shifted to secular-nationalist Iraq. After the briefest of interruptions, the US-Saudi alliance was once again up and running."

In this long-established atmosphere, Abedin’s family background and ties were not seen as unusual or alarming, Lazare explained.

"If Abedin's Saudi-Muslim Brotherhood ties failed to raise eyebrows in Washington, it is because no one saw them as the least bit problematic."

Mounting Scandals Risk 'Forcing Hillary From Office' If She is Elected
Over the decades, Bill and Hillary Clinton have raised as much as $80 million from various Arab gulf sources, Lazare noted.

"Given all this, Huma Abedin seems like distinctly small potatoes."

Abedin was probably protected by Clinton from ever having to undergo routine vetting before serving as her top lieutenant, veteran former CIA counterterrorism officer Philip Giraldi told Sputnik.

"I would suspect that she [Abedin] was never properly vetted by State Department security. Senior members of an administration are often allowed to bring in their own personal staff."

If objections were raised regarding Abedin’s background, Clinton could have insisted that she be cleared anyway on her own authority, Giraldi explained.

"That is precisely how folks like Doug Feith and Richard Perle were cleared at the Pentagon in spite of their counter-intelligence FBI files based on their sustained contact with Israeli intelligence officers. Paul Wolfowitz cleared them on his own authority over the objections of those who did the investigations."

000000
Popular comments
Of course they are doing it, Its been known that Huma Abedin has known links to Al Queda, but the Clinton Family Mafia, is still backing them
earlw35
7 November 2016, 21:28 GMT
000000
www.counterpunch.org/2004/02/28/neo-cons-israel-and-the-bush-administration Neo-Cons, Israel and the Bush Administration It's amazing to me that the vetting for security clearance is waived because some corrupt politician says so. This is far worse than I thought.
jas
8 November 2016, 02:12 GMT1
000000
Newsfeed
0
New firstOld first
loader
LIVE
Заголовок открываемого материала
Access to the chat has been blocked for violating the rules . You will be able to participate again through:∞. If you do not agree with the blocking, please use the feedback form
The discussion is closed. You can participate in the discussion within 24 hours after the publication of the article.
To participate in the discussion
log in or register
loader
Chats
Заголовок открываемого материала
Worldwide
InternationalEnglishEnglishMundoEspañolSpanish
Europe
DeutschlandDeutschGermanFranceFrançaisFrenchΕλλάδαΕλληνικάGreekItaliaItalianoItalianČeská republikaČeštinaCzechPolskaPolskiPolishСрбиjаСрпскиSerbianLatvijaLatviešuLatvianLietuvaLietuviųLithuanianMoldovaMoldoveneascăMoldavianБеларусьБеларускiBelarusian
Transcaucasia
ԱրմենիաՀայերենArmenianАҧсныАҧсышәалаAbkhazХуссар ИрыстонИронауОssetianსაქართველოქართულიGeorgianAzərbaycanАzərbaycancaAzerbaijani
Middle East
Sputnik عربيArabicArabicTürkiyeTürkçeTurkishSputnik ایرانPersianPersianSputnik افغانستانDariDari
Central Asia
ҚазақстанҚазақ тіліKazakhКыргызстанКыргызчаKyrgyzOʻzbekistonЎзбекчаUzbekТоҷикистонТоҷикӣTajik
East & Southeast Asia
Việt NamTiếng ViệtVietnamese日本日本語Japanese中国中文Chinese
South America
BrasilPortuguêsPortuguese
NewsfeedBreaking
18:16 GMTWatch Massive Migrant Caravan Push North Into Mexico as US Reports Record Apprehensions
18:13 GMTWatch Iranian Governor Getting Slapped on Stage During His Inauguration
18:10 GMTAssange's Extradition Incomprehensible After Revelations CIA Plotted to Kill Him, Fiancée Says
17:42 GMTUnderwater Treasure May Point to Location of Long-Gone 'Island of Gold' Empire
17:01 GMTRansomware Gang Sells Italian Celebrities' Data Stolen in SIAE Breach for $500,000 – Report
16:36 GMTUS Media Dubs Russia’s Okhotnik Drone ‘Beast’ That Could Pose ‘Big Problem for NATO’
16:14 GMTRussia Urges UN Mission to Ensure Security of Staff in Russian Office in Pristina
16:06 GMTGreek Police Say 7 Officers Injured in Chasing Car Thieves in Athens, One Offender Dead
15:47 GMTRussia-Turkey Friendship Park Opens in Antalya - Video
15:06 GMTTuskless Elephants Evolve in Mozambique Amid Ivory Poaching, Scientists Say
15:03 GMTCCTV Footage Shows Moment Russian Explosives Plant Turned Into Deadly Blazing Inferno
14:54 GMTStunning Discovery of 193 Million-Year-Old Dinosaur Eggs Sheds New Light on Reptiles’ Early Species
14:52 GMTErdogan: Ambassadors of 10 Countries Calling for Human Rights Activist's Release to Be Expelled
14:26 GMTAntifa Protest in Support of Left-Wing Politics Takes Place in Stuttgart
14:18 GMTGazprom Ready to Prolong Gas Supplies to Moldova if Kishinev Pays Gas Debts
14:06 GMTRussian MoD: Berlin Must Know How Amassing Troops Near Russia's Border Ended for Europe in Past
13:59 GMTTokyo Says Self-Defenсe Forces Fighters Scrambled Over Chinese Chopper Takeoff Near Danjo
13:54 GMT24-year-old Who Prepared Fatal Prop Gun for Baldwin Was Worried She ‘Wasn’t Ready’ for Armourer Job
13:15 GMT‘Wicked Sense of Humour’: Turkey Pinches Reporter’s Buttocks, Other Birds ‘Giggle’ - Video
13:02 GMTRally in Support of Assange Takes Place in London