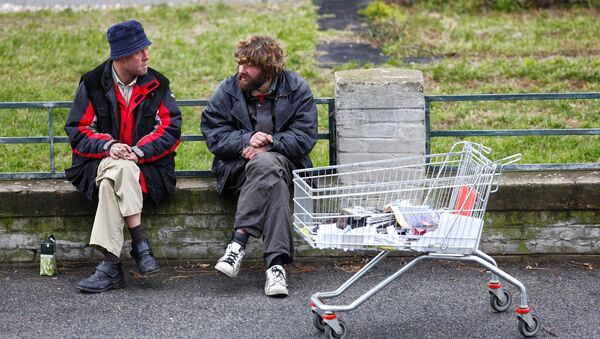 The British government's war on the poor continues as the Department for Work and Pensions (DWP) latest cap on benefits comes into force. Decisions whether to eat or heat are set to become a reality as the cold weather begins to bite, with some households facing losses as much as £150 (US$186) a week in state benefits.

It's the UK government's method of taking away as much money as possible in so-called "handouts" to encourage people into work. The cap on benefits, including the Job Seeker's Allowance, housing benefit and working tax credits was introduced by the UK's Coalition government but honed by the Conservatives, who changed the law to lower household benefit income to US$24,800.

NOT in the @Conservatives 2015 manifesto — Benefit cap cut to £20k outside Greater London. (It was meant to be £23k everywhere) pic.twitter.com/R90eZlqAcb

The new cap, which is being rolled out across the UK between November 2016 and February 2017 and targeting Britain's poorest, will according to the Institute of Fiscal Studies (IFS) save the government a "trivial amount of money." It's believed around 116,000 households in the UK have been told by the DWP that they will lose US$74 (£60) per week.

A recent study published by the IFS suggests that only five percent of 80,000 households targeted by the UK government, when the first benefit cap came into force, actually got jobs and moved into work. Many local authorities are concerned that the further benefit caps will lead to a surge in rent arrears and homelessness.

Meanwhile the gap between the "haves and the have-nots" in Britain is becoming ever-closer as one volunteer working at a London food bank told Sputnik.

"The gap between the haves and the have-nots is visibly getting closer," the volunteer explained, while wanting to remain anonymous.

"We had a middle-class couple in here, the husband had been made redundant, she had a small child and wasn't working and they had no savings, they suddenly found themselves unable to afford basic foodstuffs.

"We've definitely seen an upsurge in donations since the film I, Daniel Blake. We're just stockpiling at the moment because support tends to dwindle in the New Year."

Seen I, Daniel Blake? Want to do something? Go and volunteer at your local food bank! 👍👍 https://t.co/cCRu8ar2s2

Destitute Nation: More Than a Million 'Weak, Dirty and Hungry' in Britain
According to secretary for state for work and pensions, Damien Green: "By lowering the cap today, we are ensuring the values of this government continue to chime with those of ordinary working people and delivering on our commitment to make sure work pays more than welfare."

However, the IFS suggests that the money saved by the UK Treasury, will be offset by emergency hardship payments to council tenants who fall behind on their rent.

Around US$31 million worth of Discretionary Housing Payments (DHPs) have been issued to council tenants already suffering financially from the previous government benefit cut. This amounts to 40 percent of the US$80 million saved by lowering the amount of money households can receive in benefits.

"These DHPs look likely to play a key role in mitigating the impact of the cuts on some of the families affected — whilst rendering the net fiscal savings from the cap all the more trivial," the IFS report said.

These "trivial" savings meanwhile, have the capacity to have monumental effects on the poorest households in Britain over the coldest months of the year. The IFS report says "the majority of those affected will not respond" to the new cap or will "neither moving house — or finding work."