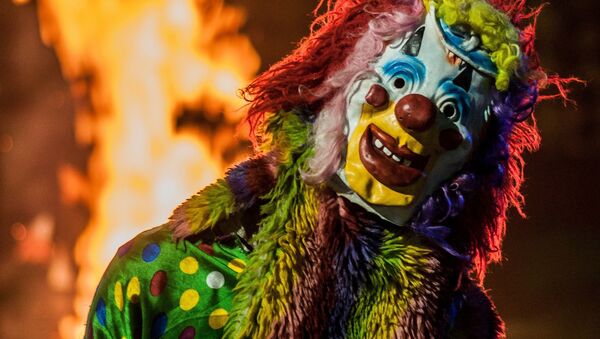 On Halloween night, a horror clown triggered a traffic accident in Klagenfurt, Austria.

Creepy Clown Attacks Car in Russia, Driver's Reaction is Far from Panic (VIDEO)
A 19-year old car driver spotted a frightening clown standing on the road and holding an ax in his hand, local media reported.

The young man was so shocked by the clown suddenly emerging from the fog that he crashed right into him.

Later, it turned out that the 27-year-old dressed as a clown was walking on the street at 1.45 am. The man was drunk and was apparently coming from a Halloween party.

According to reports, the 19-year-old car driver first drove away from the scene, but later went to the police.

The clown was said to be slightly injured.

"This is nonsense how 27-year old people allow themselves act nowadays. They don't have much in their head except for air."

Earlier, in Wesel, Germany a 48-year-old woman was attacked by a chainsaw-wielding clown who jumped out from some bushes. He reportedly tried several times to start the chainsaw but failed, allowing the woman and her dog to escape unscathed.

Police forces and schools in some European countries and the US issued public statements pleading with pranksters not to follow suit. Police have asked the clowns to consider the impact that the scary interactions could have on children, but their pleas seem to have fallen on deaf ears.