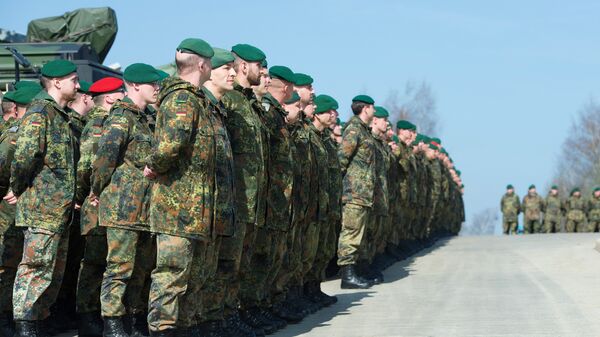 Germany's Military Counterintelligence Service (MAD) has discovered at least 20 "Islamists" among the country's armed forces and has put another 60 under surveillance for suspected Islamist leanings, German media reported November 5.

At least 29 German veterans have also gone to Syria or Iraq, Die Welt reported in August, citing military sources, and some have joined Daesh there. Between 2007 and April 2016, the country identified 22 active Islamists within its armed forces and dismissed 17 of them. (Five had reached the end of their term of service.)

Under German military law, background checks are only allowed after a person has been employed. But Daesh and other organizations are actively encouraging their followers to join state military forces to get training, according to the Berliner Morgenpost. Recruitment offices around Germany have flagged "individual inquiries from applicants who are strikingly interested in service in the Bundeswehr, expressed a commitment request of only a few months and were expressly interested in intensive weapon and equipment training," a MAD official reported.

The German military decided in August to amend legislation to allow preliminary background checks to be done starting in July 2017. A spokesman for the country's Defense Ministry at the time said the government intended "to respond adequately to the changed security situation and prevent the use of the Bundeswehr as a training facility for potential terrorists, extremists and traffickers." Now it appears the checks may take effect as early as January, according to some reports.