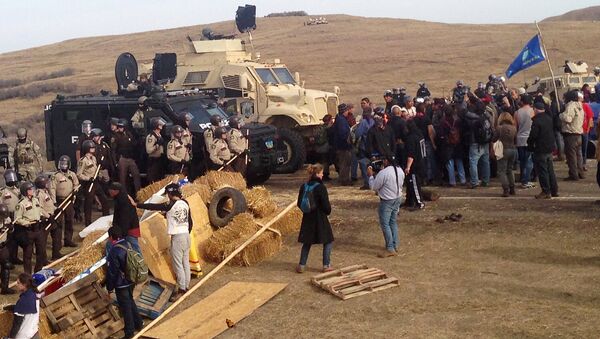 On Tuesday US President Barack Obama announced that the Army Corps of Engineers is considering alternative routes for the Dakota Access Pipeline, as protests over its construction continue.

"We're monitoring this closely and I think, as a general rule, my view is that there's a way for us to accommodate sacred lands of Native Americans," Obama told NowThis, adding  "I think right now the Army Corps is examining whether there are ways to reroute this pipeline in a way. So we're going to let it play out for several more weeks and determine whether or not this can be resolved in a way that I think is properly attentive to the traditions of the first Americans."

The Standing Rock Sioux Tribe has been camped out at the would-be site of the nearly $4 billion dollar project for months. A federal judge granted Energy Transfer Partners (ETP) the ability to move forward, but the Corps of Engineers, US Army and Department of Interior won’t allow work to begin until a new review is completed.

The agencies released a joint statement in September that read, "In recent days, we have seen thousands of demonstrators come together peacefully, with support from scores of sovereign tribal governments, to exercise their First Amendment rights and to voice heartfelt concerns about the environment and historic, sacred sites,” and that “It is now incumbent on all of us to develop a path forward that serves the broadest public interest."

The Sioux have claimed that pipeline, which would cross four states, would be devastating to the environment and their cultural life, and have clashed with police over land they say is under jurisdiction by letter of treaties.

Responding to reports of police misconduct, Obama said, "My general rule when I talk to governors and state and local officials, whenever they're dealing with protests — including, for example, during the 'Black Lives Matter' protests — is there's an obligation for protesters to be peaceful, and there's an obligation for authorities to show restraint.”

"Rather than creating further uncertainty, the president should be sending us the support and resources necessary to enforce the law and protect people's right to peacefully protest." said Cody Shulz, a spokesman for Morton County who does not agree with the president’s decision to let the demonstrations run their course.

ETP representatives have stated that they are not aware of any plans to reroute the crude oil pipeline, and are waiting for the go-ahead to begin construction.

Obama also said that this fall, Native American tribes will be invited to take part in consultations about how the role should play in decisions to initiate projects like the Dakota Access Pipeline.

Dave Archambault II, chairman of the Standing Rock Sioux, responded to Obama’s comments, saying, "We believe President Obama and his administration will do the right thing."