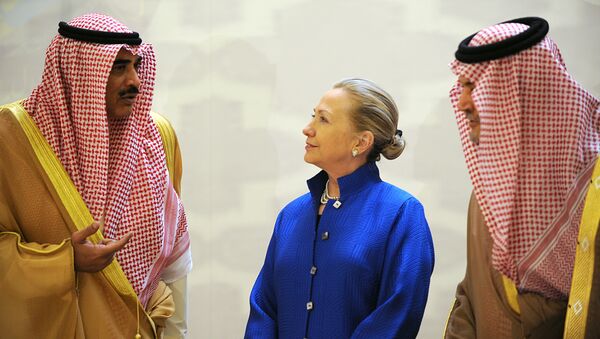 MOSCOW (Sputnik) – An early 2014 email from Hillary Clinton to her campaign manager, John Podesta, sent not so long after she left the office of secretary of state, it is stated that Qatar and Saudi Arabia "are providing clandestine financial and logistic support to ISIL [Daesh] and other radical Sunni groups," Assange said, adding that Clinton was urging Podesta (then advisor to Barack Obama) to "bring pressure" on the two countries.

The US government has agreed that some Saudi figures had been supporting Daesh, Assange claimed "but the dodge has always been that it is some ‘rogue’ princes using their oil money to do whatever they like, but actually the government disapproves. But that email says that it is the government of Saudi Arabia, and the government of Qatar that have been funding ISIS [Daesh]."

Saudis, Qataris, Moroccans and Bahrainis have also been contributing to the Clinton Foundation during Clinton’s tenure as the top US diplomat. The flow of US arms to the Arab monarchy soared during that time.

Hillary Clinton Admits Qatar, Saudi Arabia Support Daesh in Leaked Emails
Assange said Clinton’s emails revealed discussions of what became the largest ever arms deal in the world between the United States and Saudi Arabia of "more than $80 billion."

Asked if Daesh was created largely with money from people who are giving money to the Clinton Foundation, Assange replied, "Yes."

In a September 27, 2014 email, sent from Hillary Clinton’s hrod17@clintonemail.com address and published online by WikiLeaks last month, Clinton wrote that Qatari and Saudi governments were "providing clandestine financial and logistic support to ISIL and other radical Sunni groups in the region."

John Pilger’s interview with Julian Assange was possible due to the courtesy of Dartmouth Films.