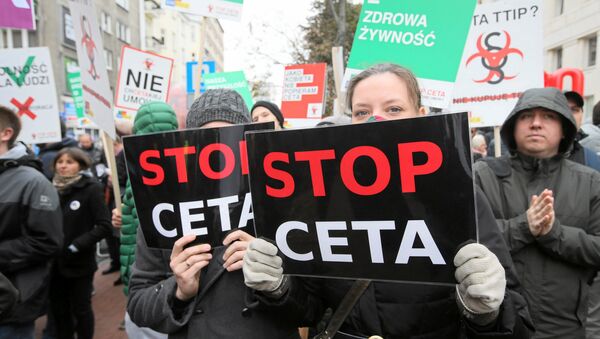 © REUTERS / Agencja Gazeta
Subscribe
Canada and the EU signed the Comprehensive Economic and Trade Agreement – a widely criticized trade deal, which was almost derailed at the last minute by Belgium's French-speaking region of Wallonia on Sunday. Radio Sputnik discussed the matter with Dr. Alfred de Zayas, who is a UN independent expert a democratic and equitable international order.

“There is a disconnect between power and the people. Parliaments don’t follow the will of the people. In a democratic society [we need a system] of opinion polling and referenda. Not all of the 28 EU members have provisions for referenda, but it is necessary because [CETA] has enormous consequences for the people who will have problems with medicines and local governments — with environmental protection legislation, because otherwise they could be sued by corporations,” Alfred de Zayas said.

'Trojan Horse': CETA Designed to Pave the Way for TTIP Implementation
He emphasized the need to involve people in approving these kinds of measures.

“The key stakeholders — environmental and health experts and labor unions — were excluded. The treaty was concocted in secrecy. This is a culture of bullying of parliaments. The governments bent to the lobbies and the one country that opposed the treaty, Wallonia in Belgium, was put under enormous pressure. We have here a problem of legitimacy. That’s why referendums are necessary,” he emphasized.

Alfred de Zayas said that CETA would definitely be challenged in Germany and also before the European Court of Justice “because you cant’s create a system of dispute settlement that is not independent, transparent and accountable.”

“They invented what I call a phony court where investors can sue states, but state can’t sue investors. The Association of German Magistrates has come out with an opinion that devastated this proposal. We need to eliminate the chapter on investor protection. This is a violation of the most fundamental principle of the rule of law. My expectation is that it will be rejected by several parliaments.”

He argued that a state’s duty  is to regulate and legislate in the public interest and that it was impossible to demand that a state guarantee the profits of the investor.

The Little Belgian Region That Could…Almost Derail the Entire CETA Trade Deal
And there is no evidence that by signing a multilateral investment treaty of a bilateral one you are going to have more direct foreign investment.

“This is the siren call that has led many developing countries in Latin America and Africa to sign similar treaties that encroach on the sovereignty of the state, which no longer dares to impose necessary regulations on pollution, to raise the minimum wage [to make sure that foreign investors do not lose even a portion of their profit and do not sue the state].”

“I am concerned about the impact CETA could have on Europe because it would multiply by a factor of ten the number of potential claims by companies that would sue European governments. This is a really serious matter and  the consequences are enormous for the population. That’s why the population must be consulted,” Dr. Alfred de Zayas said in conclusion.

Before it is implemented, CETA must still be adopted by the European Union's Parliament. After that, to enter into force, the deal will have to be ratified by all 28 members of the supranational bloc. However, according to a UN expert, the deal in its current state can hardly be seen as legal.