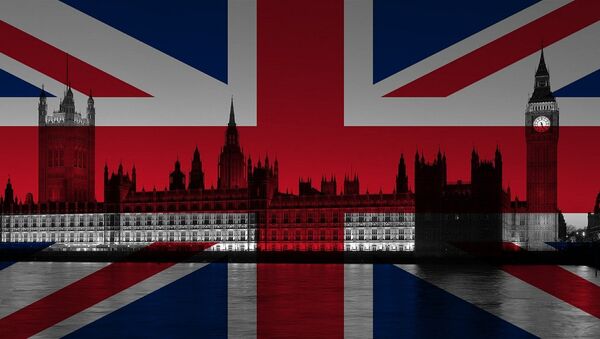 Neil Clark
All materials
The Thursday, November 3, ruling by the UK High Court that Brexit will need Parliamentary approval has been met with a furious response from anti-EU newspapers, politicians and campaigners.

The euroskeptic Daily Mail certainly didn't mince its words, denouncing the three judges who made the ruling as "Enemies of the People" on its Friday, November 4, front page.

After today's judgement I'm really beginning to question the independence of our judiciary.

Well, for what it's worth, I think the High Court judgement was flawed, bearing in mind the pledge made by the UK government on the referendum leaflet that they would implement what the people decided, and there must be a great chance the ruling will be overturned on appeal at the Supreme Court.

That said, the anger directed at the High Court judges while understandable, is rather misplaced. If we want to find the real guilty party in this #Brexitshambles, then we need to look no further than the Conservative government.

On June 23, the British people, by a majority of 52% to 48%, voted to "Leave the European Union" — to use the exact wording on the ballot paper.

"This is your decision," the government declared in the referendum leaflet which was sent to every household in the country.

"The government will implement what you decide."

What should have happened on June 24 — or at least at some point in the week which followed — is the invocation, by the British government, of Article 50, formally starting the UK's withdrawal from the EU. That is, after all, what Prime Minister David Cameron had promised us back in February.

"If the British people vote to leave, there is only one way to bring that about, namely to trigger Article 50 of the treaties and begin the process of exit, and the British people would rightly expect that to start straight away," Cameron said.

The much-maligned Labour leader Jeremy Corbyn did in fact call for Article 50 to be triggered straight away after the referendum result was announced.

"The British people have made their decision. We must respect that result and Article 50 has to be invoked now so that we negotiate an exit from European Union," Corbyn said.

And we can't blame so-called "Eurocrats" for the failure to send off Article 50 either. 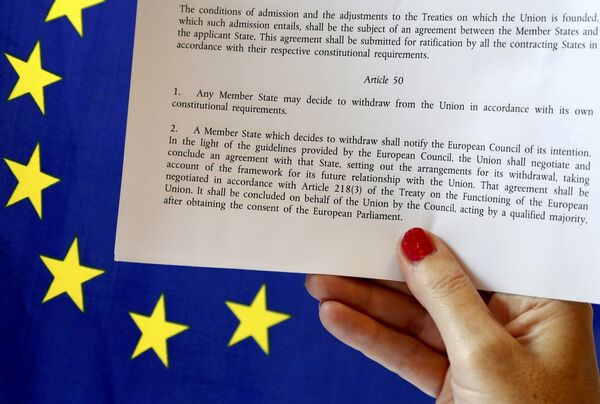 Article 50 of the EU's Lisbon Treaty that deals with the mechanism for departure is pictured near an EU flag following Britain's referendum results to leave the European Union, in this photo illustration taken in Brussels, Belgium, June 24, 2016.
© REUTERS / Francois Lenoir

On June 24, no less a personage than Jean-Claude Juncker, President of the European Commission, called for Britain to trigger Article 50 "as soon as possible." Mark Rutte, the Prime Minister of The Netherlands, the country which then held the EU's rotating Presidency, was quoted in the Guardian as saying that any delay to Brexit would "unnecessarily prolong uncertainty."

For 40 yrs #UK relation with #EU was ambiguous. Now it's clear. Will of voters must be respected. Now need speedy & clear exit negotiation

But a "speedy and clear exit negotiation" is what we most certainly didn't get from the UK government.

It soon became clear that the Tories — and even Tories who had campaigned for Brexit — had never expected the British people to vote Leave. And when they voted Leave, the Tories — as commentator Scott Nelson correctly states — didn't have a clue what to do next.

Article 50 should have been invoked on 24 June but the Tories had no Brexit strategy. Cameron didn't expect a Brexit outcome @mikky_big

The Tory response to the shock result was to come out with platitudes — like Theresa May's classic "Brexit means Brexit" and to keep delaying the triggering of Article 50. The promises made by Cameron were quietly forgotten.

We were told that instead of invoking Article 50 "straight away" — the process wouldn't begin at all in 2016.

This inaction only emboldened Remainers, the vast majority of whom had fully accepted the June 23 result.

It was inevitable, and indeed totally foreseeable, that given the government's procrastination, legal challenges to Brexit would be launched. Cynics might even argue that as new Prime Minister Theresa May herself was Remainer — and given her party's heavy dependence on funds from the generally pro-Remain City of London — delaying Brexit until such challenges could be brought, may even have been part of the strategy.

Although Brexit is likely to pass the House of Commons, should the appeal to the Supreme Court fail, the House of Lords could still throw a sizeable spanner in the works, potentially triggering a major constitutional crisis. Arguments over Brexit look likely to dominate British politics for months to come.

An atmosphere that was already poisonous enough, is likely to become even more so. It really didn't have to be like this.

I now fear every attempt will be made to block or delay triggering Article 50. They have no idea level of public anger they will provoke.

It's worth remembering that the decision to give the public a vote on Europe was only made by David Cameron because he feared UKIP doing serious damage to the Tories' electoral prospects.

His referendum pledge helped him over the line in the 2015 general election, but the Tories failure to act swiftly in June, after the people had made their historic decision, has created enormous problems.

To see the UK government now posing as the protectors of the "people's will" against the judiciary is nauseating to say the least.

Hopefully, enough people will see through the charade, for the current #Brexitshambles wasn't cooked up by three judges in the High Court, but in Number 10, Downing Street.

000000
Popular comments
Both labour and the conseratives are using each other as excuses to delay and then bin the Brexit vote and the judges will play there part in the plan and do as they are told by the hidden elite. What part of democracy do they not understand or does this isue need taking to the lamp posts where we the people get to decide once again for ourselves what we do and don't want to do like free men once did. Much more than just 52% voted out and UKIP are in on the dirty tricks too and should not be trusted to deliver anything but hot air and Nigel Farage is nothing more than a puppet thats sole job was to take away votes from the BNP and to deliver nothing you could take to the bank.

Jammy
4 November 2016, 16:29 GMT
000000
First of all, Cameron and Johnson and such are neocons, not conservatives. There's a huge difference. The easiest way to tell is that conservatives are against foreign interventions. Nationalists, by the very nature of the term, are not going to be in some other land bullying people about how they live. That's more of a globalist (left) approach.
jas
6 November 2016, 01:45 GMT
000000
Newsfeed
0
New firstOld first
loader
LIVE
Заголовок открываемого материала
Access to the chat has been blocked for violating the rules . You will be able to participate again through:∞. If you do not agree with the blocking, please use the feedback form
The discussion is closed. You can participate in the discussion within 24 hours after the publication of the article.
To participate in the discussion
log in or register
loader
Chats
Заголовок открываемого материала
Worldwide
InternationalEnglishEnglishMundoEspañolSpanish
Europe
DeutschlandDeutschGermanFranceFrançaisFrenchΕλλάδαΕλληνικάGreekItaliaItalianoItalianČeská republikaČeštinaCzechPolskaPolskiPolishСрбиjаСрпскиSerbianLatvijaLatviešuLatvianLietuvaLietuviųLithuanianMoldovaMoldoveneascăMoldavianБеларусьБеларускiBelarusian
Transcaucasia
ԱրմենիաՀայերենArmenianАҧсныАҧсышәалаAbkhazХуссар ИрыстонИронауОssetianსაქართველოქართულიGeorgianAzərbaycanАzərbaycancaAzerbaijani
Middle East
Sputnik عربيArabicArabicTürkiyeTürkçeTurkishSputnik ایرانPersianPersianSputnik افغانستانDariDari
Central Asia
ҚазақстанҚазақ тіліKazakhКыргызстанКыргызчаKyrgyzOʻzbekistonЎзбекчаUzbekТоҷикистонТоҷикӣTajik
East & Southeast Asia
Việt NamTiếng ViệtVietnamese日本日本語Japanese俄罗斯卫星通讯社中文（简体）Chinese (simplified)俄罗斯卫星通讯社中文（繁体）Chinese (traditional)
South America
BrasilPortuguêsPortuguese
NewsfeedBreaking
15:36 GMTUK TV, Radio Could Get Into Trouble for Using Terms "Karen", "Snowflake" & "Gammon"
15:33 GMTNATO Partners Agree to Revise Alliance's Concept, French Defence Minister Says
15:23 GMTBiden Says US Launching Vaccine Partnership With EU to Expand Global Vaccination
15:22 GMTBiden Hosts Virtual Summit on COVID-19 Pandemic
15:20 GMTGravitational Waves or Cosmic Rays? Strange Signals Reportedly Picked Up by 'Tabletop Detector'
15:02 GMTUnited Nations General Assembly 76th Session: Day Two
14:43 GMTMoscow: Washington Manipulates Visas to Put Pressure on Other Countries
14:28 GMTReverse Psychology: Fake Funeral Home in US Promoted Vaccine Shots
14:27 GMTGerman Government Says Unaware Who Sponsored Navalny's Accommodation in Germany
14:26 GMTMan Accused of Plotting to ‘Topple UK Government’ to Stop ‘Communist System’ Faces Trial in 2022
14:26 GMTUK Recognises Covishield, Falls Short of Validating India's Vaccine Certificates
14:02 GMTUK Foreign Secretary Hopes Russia, China Will ‘Act as One’ in Engaging With Taliban
14:01 GMTUS Assures EU of Solidarity in Seeking 'Solid' Gas Supply in Winter
13:34 GMTXi Jinping Vows China Will Never ‘Invade or Bully’ States, Calls to Reject ‘Zero-Sum Games’
13:08 GMTNuclear Power, Food and Other Industries Affected by UK CO2 Shortage, Which is Spilling into Europe
13:08 GMTZelenskyy's Aide Shefir Says Assassination Attempt on Him Aimed at Intimidating Government
12:58 GMTMerkel, Kramp-Karrenbauer Pay Tribute to German Soldiers Who Participated in Afghanistan Evacuation
12:48 GMTPakistan to Keep Sending Aid to Afghanistan, Focus on Humanitarian Mission, Ambassador Says
12:45 GMTGerman Energy Ministry Believes Russia Fulfilling Gas Supplies Obligations
12:25 GMTOne Cable to Rule Them All: EU to Demand Use of Common Charger for Smartphones by 2024