US politicians and media pundits claim that attempts to draw parallels between the situations in Mosul and Aleppo are inconsistent and even "insulting." According to the Chinese media outlet, the US' approach to the two events is obviously biased and non-objective.

Washington is pursuing its own vested interests by conducting military operations in Syria and Iraq, while the US' attitude to these two wars is biased and non-objective, China's media outlet, the People's Daily (Renmin Ribao), pointed out.

"Two big wars in the Middle East have recently become the focus of worldwide attention: one of them is an offensive against Mosul, initiated by the Iraqi government, another is the Syrian government's military operation in Aleppo," the People's Daily reported, adding that although the two wars have much in common, the US' approach to each of these events is very different and driven by Washington's own geopolitical interests.

A Tale of Two Terrorist-Held Cities: How the Fight for Aleppo and Mosul Differ
The media outlet called attention to the fact that both Daesh (ISIS/ISIL), which is holding Mosul, and al-Nusra Front, that is fighting for Aleppo, were designated by the UN as terrorist organizations.

However, although Washington is praising the Iraqi offensive on Mosul and providing Baghdad with the military support to liberate the city, it is at the same time "protecting" al-Nusra Front in Aleppo and trying to throw a wrench in the efforts of the Russo-Syrian coalition to oust the extremist organization from its Syrian foothold.

Remarkably, US politicians and media pundits refuse to draw parallels between the situations in Mosul and Aleppo.

On Monday State Department spokesman John Kirby claimed that "the attempts" to compare the situations in Mosul and Aleppo are "ludicrous" and "absolutely insulting," Karen DeYoung of The Washington Post reported.

"Both the United States and the United Nations said Tuesday that they had no reports of civilian casualties attributed to coalition or Iraqi forces during the Mosul offensive that started two weeks ago," DeYoung underscored. 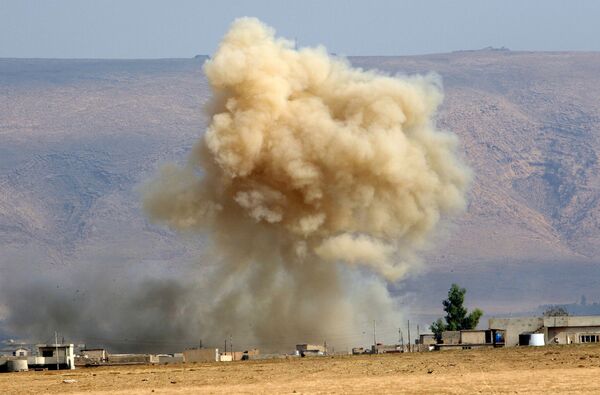 However, the Russian General Staff reported Thursday about civilian casualties in populated areas near Mosul as a result of the US-led coalition's air strikes.

Aleppo Violence Would End in 10 Days if West 'Stopped Financing the Militants'
For her part, Russian Foreign Ministry spokesperson Maria Zakharova called attention to the fact that the humanitarian situation is degrading steadily in Mosul.

"There are 6 humanitarian corridors opened in Aleppo, but there is nothing like this in Mosul. In Aleppo, two special corridors remain open for the safe exit of militants with arms and military equipment to other areas of Syria, in Mosul fighting continues until all militants are killed. Moreover, UN representatives are working in Aleppo, as well as Red Crescent and other international organizations, and journalists. In Mosul, there is no such humanitarian presence and media coverage of events," Zakharova stressed.

In his recent opinion piece RIA Novosti political analyst Alexander Khrolenko criticized the US' attempts to downplay the significance of Russia-backed Syrian Army's operation in Aleppo while at the same time glorifying the US coalition's operation in Iraq's Mosul.

What lies at the root of the US' non-comprehensive coverage of the situation on the ground?

The People's Daily emphasized that the US and other Western states named the resignation of Syrian President Bashar al-Assad as a necessary precondition for the solution of the Syrian crisis. However, facts on the ground have indicated that such a position has created an enormous barrier to a peaceful settlement of the Syrian conflict.

The media outlet underscored that it was the Russian Air Force operation in Syria that has contained the US forces in the Middle East. Thus, unsurprisingly, the Russian factor has become the focus of the US' Syrian policy.