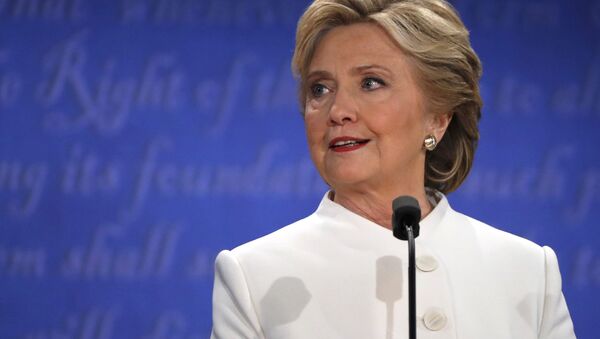 © REUTERS / Carlos Barria
Subscribe
Ekaterina Blinova
All materialsWrite to the author
However harsh Hillary Clinton's rhetoric toward China and Russia is, she will not be able to escalate tensions with Moscow and Beijing or establish a no-fly zone in Syria if elected, given the current geopolitical situation, US political commentator Stephen Ebert told Sputnik, adding that Clinton is "much of a realist."

Hillary Clinton's reinvigorated foreign policy stance is intended to produce an effect on US voters, with Clinton staking out a clear position as a "strong leader," and a clear alternative to her rival, Republican presidential nominee Donald Trump, Stephen Ebert, US political commentator and expert at the Agency for Strategic Communications, believes.

Citing Clinton's top aides the Wall Street Journal reported last Thursday that if the Democratic presidential nominee comes out on top in the result of the November election, she will take "a more aggressive posture" in Syria, "work to impose a no-fly zone," and will consider tougher sanctions on both Russia and Iran.

"I believe this is more focused on the US electorate, with Clinton staking out a clear position as a 'strong leader, and a clear alternative to Trump," Ebert told Sputnik.

EXCLUSIVE: Source of DNC, Podesta Leaks 'Comes From Within Washington'
"The topic of a no-fly zone has come up before, and here, in my opinion, simply helps reinforce her stated commitment to 'avoid introducing US ground troops into Syria.' That is, by telling the American voter she will use no-fly zones to counter Russia, it makes them feel better — that is, that no 'American boys' will die," he explained.

"I believe her overall positioning actually gives her more room for maneuver domestically since typically Democrats are seen as weak on 'defense' — and internationally. Obama was clearly viewed this way, and it always undermined him, drove him to some rash decisions he likely did not really want to make (for example, Syria)," Ebert pointed out.

Will Clinton really try to establish a no-fly zone over Syria and risk a direct confrontation with Russia, if elected?

"She may well continue to threaten this, but if she has good advisers and intelligence (a troubling question mark since lately our 'intelligence' has ceased to be 'impartial'), she will be told this act would indeed risk war, and would actually damage the concept of 'the whole world' being in agreement with the US," the political commentator responded.

"Such increased aggression — with the US being viewed outside the EU as the illegal interloper — would run the risks of increasing at least Chinese active opposition," he remarked.

"Domestically speaking, Clinton will likely also find her hands tied by an even more aggressive and uncooperative political opposition, one more hostile to her than it was even to Obama. This may well prevent her from taking a number of 'unilateral' steps," Ebert believes. 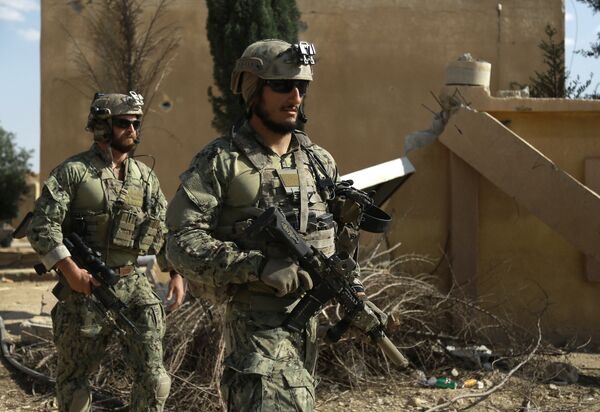 Armed men in uniform identified by Syrian Democratic forces as US special operations forces walk in the village of Fatisah in the northern Syrian province of Raqa on May 25, 2016
© AFP 2021 / DELIL SOULEIMAN

Clinton Has No Leverage to Reinforce Unipolar World Order

Trump Just Two Points Behind Clinton After FBI Reopens Email Probe
Some observers suggest that Clinton wants to revive the status quo which the US gained immediately after the end of the Cold War and the collapse of the USSR, when Washington enjoyed an absolute hegemony. Is it still possible or has the world irreversibly changed since those times?

"Despite Clinton's foreign policy positions, and hard line on Russia, she has been an extremely savvy and competent politician," Ebert highlighted.

The political commentator drew attention to the fact that unlike Obama, Hillary Clinton "is more of a realist."

"While continuing to espouse his line of 'US exceptionalism,' she may well understand the world is increasingly rejecting that concept," the expert underscored.

"If she were to continue to enforce the monopolar world view, she will hugely damage her domestic agenda, which is correctly largely focused on addressing the many social and economic ills facing the country — crumbling infrastructure, growing internal strife, with all groups pitted against one another, and the continued growth in income inequality," Ebert elaborated.

"She is also shrewd enough to know that if she does not address an ever declining middle class, and growing poverty, she will be tossed out in the next election. Last but not least, the US economy, predictably cyclical in nature with a collapse every 8-10 years or so, having now gone thru 6-7 years of albeit slow growth and recovery, is now due for yet another downturn," he pointed out. 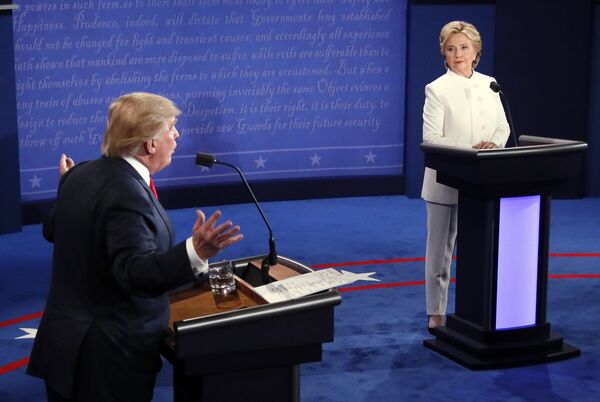 Clinton Will Have to Come to Terms With Russia, China if Elected

In his latest opinion piece for The Financial Times, Robert John Sawers, the former head of Britain's Secret Intelligence Service, proclaimed that the US unipolar era has finally ended and the next US president needs to avoid confrontation with Russia and China, treating them as "great powers" in the first place. Will Clinton or Trump follow Sawers' advice when elected?

"I do with regard to Clinton because despite her seeming aggression, she is, in my view, the only one of the two who has experience and the temperament to deal with larger world issues," the political commentator highlighted.

Assange Dismisses Claims of Russia's Involvement in US Election Campaign
"Despite Trump's claims to be 'nicer' and have the US retreat into some idealistic, early 20th century isolationism, he has called for several things which belie a move away from US domination," he pointed out.

"First, a large increase in US defense spending and capabilities, and a call not for 'disbanding' NATO, but rather, in typical Trumpian 'money'-based reasoning, simply 'demanding' NATO countries pay their 'fair share' — a fair share which will then be directed only at military spending. Against whom, is the only question," Ebert stressed.

He also recalled Trump's controversial remark made by him following a Russian Su-27 plane maneuver over a US ship in the Baltic Sea in April.

In an interview on BuzzFeed radio show K File the Republican presidential nominee said that if a rival refuses to stop such approaches to American military assets, the US should begin shelling at it.

"You know, at a certain point, when that sucker comes by you, you gotta shoot," Trump said, as quoted by Newsweek.

"[Trump] has already stated on many occasions his willingness to take drastic actions — from shooting down Russian planes that 'fly too close,' or ready to take military action against Iran because it sailors 'gave the finger' to American warships," Ebert underscored.

'Heads Up': #Podesta26 Emails Reveal FBI Mole
No matter how harsh Clinton's rhetoric is, she will not be able to simply do whatever she wants, if she wins, he emphasized.

Indeed, as General Joseph Dunford, Chairman of the Joint Chiefs of Staff, told the Senate Armed Services Committee on September 22, "for us to control all of the airspace in Syria it would require us to go to war, against Syria and Russia."

"Clinton will have to come to terms not simply with Russia defending the sovereign right of nations — opposing US hegemony, but the sheer folly of pursuing a harder line against China," Ebert continued.

"China is hugely critical to US economic success — a huge market, a major supplier of capital and investments, and a continuing source of cheap goods for the average, ever poorer US consumer. Not to mention that continued sanctions against Russia, largely hurting the EU (but not the US) are stalling EU economic recovery, and thus leading to more and more to the rise of the power of 'nationalist,' right-wing forces in Europe, forces which do not bode well for the US and overall world stability," the political commentator concluded.

During her latest press briefing Russian Foreign Ministry spokesperson Maria Zakharova called attention to a paradoxical fact: politicians who had blamed Russia for almost everything changed their mind after being elected and tried to forge closer ties with Russia. However, those who had spoken about Russia in a positive way later became tougher toward Russia.

000000
Popular comments
All this hyped anti-Russia, along with the anti-China, propaganda in the zio-media and by the western oligarch regimes is not just a political ploy to elect clinton. This propaganda is to pave the way for vastly increased aggression against Russia and China. Clinton is on board as a team member in this war planning. A clinton win will see a huge increase in the number of wars and their intensity. This Ebert guy is trying to soften resistence to clinton by making it seem that her war mongering is just rhetoric and won't become policy if she is elected. Its a very clever ruse and indicative of the duplicity inherent throughout western establishments.
vot tak
3 November 2016, 20:49 GMT2
000000
Very VERY good article and much needed! Too many people are just too incompetent to read between the lines with all that the candidates say.
anton
3 November 2016, 20:50 GMT
000000
Newsfeed
0
New firstOld first
loader
LIVE
Заголовок открываемого материала
Access to the chat has been blocked for violating the rules . You will be able to participate again through:∞. If you do not agree with the blocking, please use the feedback form
The discussion is closed. You can participate in the discussion within 24 hours after the publication of the article.
To participate in the discussion
log in or register
loader
Chats
Заголовок открываемого материала
Worldwide
InternationalEnglishEnglishMundoEspañolSpanish
Europe
DeutschlandDeutschGermanFranceFrançaisFrenchΕλλάδαΕλληνικάGreekItaliaItalianoItalianČeská republikaČeštinaCzechPolskaPolskiPolishСрбиjаСрпскиSerbianLatvijaLatviešuLatvianLietuvaLietuviųLithuanianMoldovaMoldoveneascăMoldavianБеларусьБеларускiBelarusian
Transcaucasia
ԱրմենիաՀայերենArmenianАҧсныАҧсышәалаAbkhazХуссар ИрыстонИронауОssetianსაქართველოქართულიGeorgianAzərbaycanАzərbaycancaAzerbaijani
Middle East
Sputnik عربيArabicArabicTürkiyeTürkçeTurkishSputnik ایرانPersianPersianSputnik افغانستانDariDari
Central Asia
ҚазақстанҚазақ тіліKazakhКыргызстанКыргызчаKyrgyzOʻzbekistonЎзбекчаUzbekТоҷикистонТоҷикӣTajik
East & Southeast Asia
Việt NamTiếng ViệtVietnamese日本日本語Japanese俄罗斯卫星通讯社中文（简体）Chinese (simplified)俄罗斯卫星通讯社中文（繁体）Chinese (traditional)
South America
BrasilPortuguêsPortuguese
NewsfeedBreaking
01:31 GMTLockheed Martin to Build US Army’s Next Generation Tactical Vehicle Based System
01:10 GMTBorder Patrol Agents Disgruntled Over Biden's Attempts to Throw Them 'Under the Bus' - Report
00:53 GMTBeard-Check: Afghan Barbers Banned From Shaving, Trimming Beards - Reports
00:27 GMTR. Kelly Found Guilty: Will Artist Be Removed From Music Services?
00:03 GMTIs Sir Alex Ferguson Right, That Ronaldo, and not Messi, Could Score a Hat-trick for Anyone?
00:00 GMTUS Senator Menendez Urges New Sanctions on Turkey if It Acquires More Russian Weapons
YesterdayInsurgents Who Detained President of Guinea Declare Transitional Charter - Reports
YesterdayTexas Lawmakers Propose New Congressional Districts in Cities of Austin, Houston
YesterdayIOM Looking for Alternatives for Haitians at US Border, Brazil Being 1 Option - Sources
YesterdayCzech Republic Will Purchase Israeli-Made Air Defenses to Replace Soviet Gear
YesterdaySPD Leader Scholz Says Yet to Hear Congratulations From CDU/CSU Rival
YesterdayTaliban Say Norwegian NGO Promises to Ship Humanitarian Aid to Afghanistan This Winter
YesterdayUS Blue-Chip, Tech Stocks Fumble on Worries of Rate Hike
YesterdaySerbian Troops Monitoring Situation at Serbia-Kosovo Border Amid Protests
YesterdayUnidentified Man Threatens Journalist, France's Potential Would-Be President Eric Zemmour - Reports
YesterdaySenate Republicans Vote to Block Gov't Funding, Debt Limit Bill Just Days Ahead of Shutdown Deadline
YesterdayGOP Slam 'Economically Illiterate' Admin After It Claims $3.5 Trillion Bill Costs 'Zero Dollars'
YesterdayUS President Joe Biden Aims to Save Obama-Era Policy DACA
YesterdayUK Calls Renewable Energy Main Alternative to Gas as Energy Crisis Deepens
YesterdayGreenland Foreign Minister Demoted Over Pro-Independence Statements - Reports