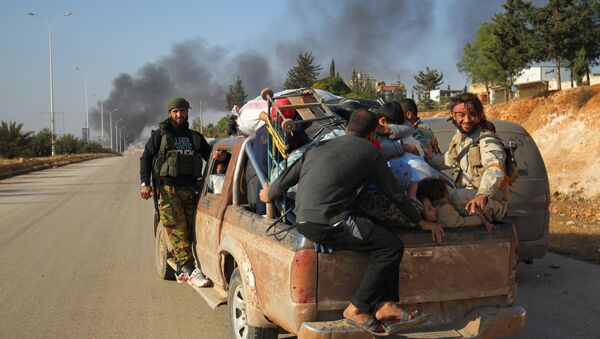 Syria's internal Hmeymim opposition group criticizes US presidential candidate Hillary Clinton for hawkish statements regarding the future US policy in the region and fears her line, in case of victory, could bring Syria back to the situation of the beginning of the war, Mais Krydee, official representative of the group, told Sputnik.

MOSCOW (Sputnik) — Democratic and Republican presidential nominees have totally opposite views on the US Syria policy, with Hillary Clinton promising to be more active in containing Russia and Iran and establishing a no-fly zone over Syria, and Donald Trump emphasizing the need to cooperate with Moscow.

"I think if we look at what Clinton said about Syria and the no-fly zone, it is clear that after 5 years of war it will put us back to the beginning of war. If the United States were serious about fighting terrorism, such proposals would never happen,” Krydee said.

She praised Trump for his intention to work closer with Russia in fight against terrorists and said Hmeymim group considers it “a serious declaration of intentions” and  “a good sign.”

“It's hard to say who of them, Trump or Clinton, is better. But I think the way that Trump speaks about Syria is less violent and more realistic. Hillary, instead, is pushing for war. … Syrian people need political solution. But this solution requires realism, requires the United States to be serious about fighting terrorism,” Krydee said.

The US presidential election will be held on November 8. The candidates run neck-and-neck, with Trump being one percent ahead of Clinton, according to the ABC News/Washington Post poll as of November 1.