Turkey 'Seeking to Neutralize Kurds, Beef Up Its Own Presence in Syria' 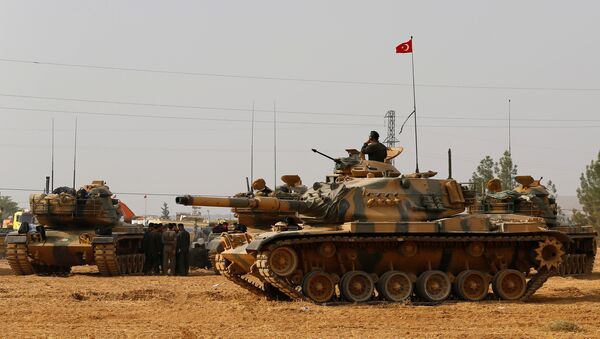 The Turkish leadership is seeking to undermine Kurdish positions in Syria and maintain control over the Syrian cities of Manbij and al-Bab, Nazmi Gur, Deputy co-Chair of People's Democratic Party (HDP), told Sputnik, arguing that the Turkish and Free Syrian Army are destabilizing the situation in Syria.

While Turkish Deputy Prime Minister Numan Kurtulmus insists that the operation to liberate the Syrian city of Raqqa from Daesh (ISIS/ISIL) should be kicked off only after Turkey's Euphrates Shield Operation is finished and Mosul is liberated from the terrorist group, Nazmi Gur, Deputy co-Chair of People's Democratic Party (HDP) and former member of the Turkish Delegation to PACE, believes that there is more to this problem than meets the eye.

However, according to Gur, Ankara's motivation behind this statement has nothing to do with the effort to defeat Daesh; instead the Turkish leadership is seeking to prevent the Syrian Kurds from gaining ground in Raqqa.

"The Turkish Armed Forces [TSK] and the so-called Free Syrian Army [FSA] hardly play a constructive role in the region," Gur underscored in an interview with Sputnik Turkiye.

US Wants to Use Offensive in Mosul, Raqqa to 'Deal a Reputation Blow to Russia'
"In reality, the goal of Turkish operations in Syria are not to defeat Daesh terrorist group but to weaken the positions of the Kurds, and that will complicate the situation even further," Gur pointed out.

The Turkish PM called attention to the fact that Recep Tayyip Erdogan does not conceal the fact that Ankara is seeking to establish control on Syria's Manbij and al-Bab.

"Recently, the question of the "National Oath" has emerged and even the possibility of the revision of the Lausanne peace treaty. It is no accident. Apparently, Ankara is trying to neutralize the Kurds in Syria, beef up its own presence [in the region] and to put forward territorial claims," Gur suggested.

On the other hand, Ankara's demands to exclude the Syrian Kurds from participation in the Raqqa operation are divorced from reality, according to the Turkish politician.

"The Iraqi people are struggling to liberate Mosul, likewise the Syrian city of Raqqa should be liberated by the Syrians with the assistance of Russia and the international coalition. The interference of neighboring or regional countries in Syrian affairs is exacerbating the situation even further," Gur warned, recalling that the bloody war that has engulfed the country is nearly in its sixth year.

Ankara Wants to Begin Liberation of Syrian Raqqa Once Mosul Free - Deputy PM
US Secretary of Defense Ashton Carter signaled last week that the operation to liberate Raqqa, Daesh's de facto capital, will be launched within the next few weeks.

"It's been long a part of our plan that the Mosul operation would kick off when it did. This was a plan that goes back many months now and that Raqqa would follow soon behind," Carter told NBC News.

However, there is a rift between Ankara and Washington regarding the upcoming operation. While the Pentagon is planning to use the Kurdish-dominated Syrian Democratic Forces (SDF) as its vanguard, the Turkish leadership is protesting against involving the Kurdish People's Protection Units (YPG) in the campaign.

"The Raqqa operation must be launched by legitimate armies," Kurtulmus highlighted referring to the fact that the YPG are regarded as "terrorists" by Ankara.

Meanwhile, the Pentagon has ruled out Russia's participation in the US-led coalition's upcoming offensive in Syria.

Last Tuesday, during a joint press conference with his French counterpart Jean-Yves Le Drian, Carter pointed out that Russia will not take part in the planned operation.

"Russia is not a participant in our Raqqa plan. We do deconflict our coalition operations with Russia through a very professional military-to-military channel. That channel is active every day, and everyone behaves themselves very professionally on both sides in that channel," Carter told journalists.