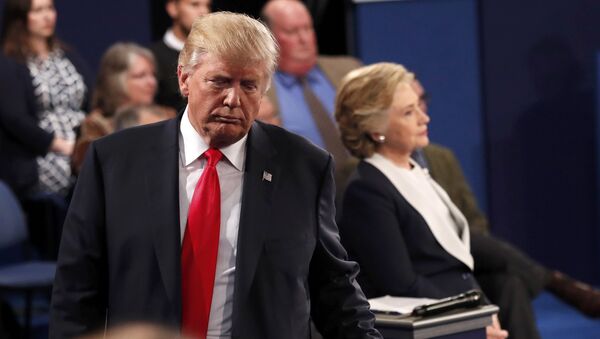 © REUTERS / Rick Wilking
Subscribe
A set of most remarkable expressions of the Russian politicians on the two main nominees for the US presidential post.

Clinton ‘Not Smart’ in Needlessly Insulting President of Russia - Trump
MOSCOW (Sputnik) – A week ahead of the US presidential elections which are due to be held on November 8 RIA Novosti introduces a set of most remarkable expressions of the Russian politicians on the nominees for the US presidential post, namely, US Democratic presidential candidate Hillary Clinton and her Republican rival Donald Trump.

"I would like to work with a person who can be accountable for decisions made and implement any agreements that we reach. Surnames don’t matter at all," Putin said in an interview with Bloomberg in September.

Putin neither made forecasts nor expressed his preferences, but noted that he did not regard both nominees’ defiant manner of running their campaigns as the best example.

"We do not know whether candidate Trump plans to realize his intentions or how far he will go in cooperating with us. [We do not know] If Clinton will put her threats and harsh rhetoric regarding Russia into action in case she becomes president. May be she will alter her position," Putin said at a press conference following the BRICS summit held in Goa in mid-October.

In October, Putin said at the Valdai Discussion Club it was "complete nonsense" to think that Moscow supported Trump for the US presidency. Putin made it clear that Russia felt more or less indifferent about the candidate’s behavior in case of victory.

In an interview with French TF1 channel Putin said that he would work with any US leader, however, he noted that "of course, it is better to work with those who want to work with us."

Head of the Russian Foreign Intelligence Service Sergey Naryshkin said that one should not expect that Clinton’s possible victory could result in establishing a new level in US-Russian relations.

US Senator Ridiculed for Suggesting Russia May Be Behind New Clinton FBI Probe
In July, Naryshkin assessed parts of Trump's program concerning bilateral relations as "vague and slightly inconsistent" and concluded that it was yet too early to make predictions on the development of US-Russian cooperation in case of his victory in the elections.

The head of the Russian Duma's International Affairs Committee Leonid Slutsky assumed that the US-Russian relations could grow easier in case Trump became the US president. However, Slutsky warned that the US supporters of unipolar global order, prevailing among the members of both Democratic and Republican parties, "see Russia as an opponent".

First Deputy Chairman of the Committee on Defense and Security at the Federation Council Franz Klintsevich compared Clinton to Margaret Thatcher, as Hillary, in his opinion, surpasses her husband in obstinacy and robust adherence to ideological principles.

Klintsevich stressed that it would be too naive to believe that Trump was a politician who did not fit in the system. "Nobody has ever met a US billionaire who fell outside the systems’s framework. In case of victory he will take off the clown’s mask and will face the honorable public in politically civilized dress," Klintsevich added.

Ivan Melnikov, the first deputy speaker of the lower house of the Russian parliament, said the advantage of Clinton’s presidency was her predictability. Melnikov assumes that Trump has more courage and ambitions to realize changes and "become the response to the challenges of today."

Communist Party leader Gennady Zyuganov compared Trump to a tank, given his belligerent manner of participating in political debates.

Chair of the Foreign Affairs Committee of the Russian upper house of parliament Konstantin Kosachev labeled Trump an "equation with all variables," adding that the result of Trump’s victory could turn out to be "equally remarkable and terrible."