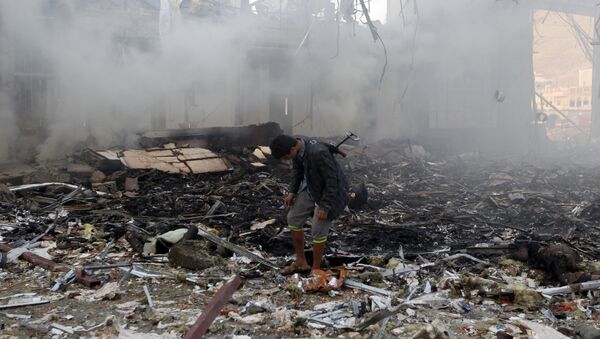 Moscow backs the work of the UN special envoy for Yemen aimed at resolving the crisis in the country, Russia's ambassador to Saudi Arabia told Sputnik.

"Russia from the very beginning has advocated and continues to back the idea of fastest cessation of hostilities and search for a political solution to the conflict [in Yemen]," Oleg Ozerov said.

According to the ambassador, peaceful and political solutions to this conflict do exist.

"Within such solutions, Russia supports the efforts by UN Special Envoy for Yemen Ismail Ould Cheikh Ahmed, who is working very actively, including with the active support from Russia," Ozerov added.

Russia's Ambassador to Yemen Vladimir Dedushkin has arrived in the Saudi capital of Riyadh to make an effort at resolving the Yemeni conflict along with over a dozen other diplomats, Ozerov told Sputnik.

"In order to emphasize our visible efforts in this regard, I would like to say that Russian Ambassador to Yemen Vladimir Dedushkin has several days ago, on October 16, arrived to Riyadh and will actively aid efforts made by [UN Special Envoy] Ismail Ould Cheikh Ahmed on finding practical solutions to reaching a ceasefire and taking the situation from the level of an armed confrontation to the level of political dialogue on existing platforms," Ozerov said.

Riyadh is a key center for diplomatic activity related to Yemeni settlement efforts, with the UN special envoy and Yemeni President Abd Rabbuh Mansur Hadi permanently based in the city, the ambassador stressed.

"Around 18 ambassadors are working here, there is an excellent platform for diplomatic contacts and discussing the prospects for political settlement," Ozerov added, noting that Saudi Arabia supports Russian involvement in the settlement process.

The situation in Yemen remains extremely unstable since the start of a military conflict in 2014 between the government forces headed by Yemeni President Abd Rabbuh Mansur Hadi and the Houthi rebels, the main opposition force in the country, supported by army units loyal to former President Ali Abdullah Saleh.

In October, Cheikh Ahmed presented a settlement plan to the parties of the conflict, though both sides have rejected it.