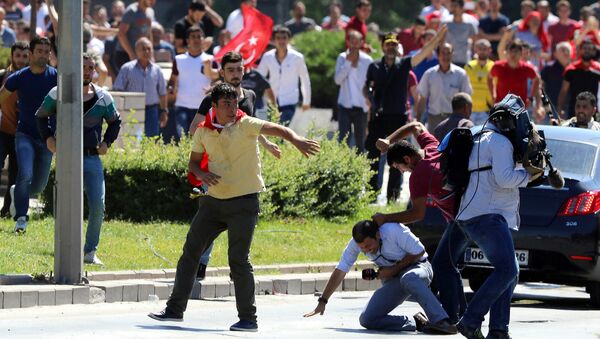 © AP Photo / Ali Unal
Subscribe
International
India
Africa
The Nationalist Movement Party's chairman said the party would back the reinstatement of the capital punishment if it were proposed in the Turkish parliament.

MOSCOW (Sputnik) — The Turkish opposition Nationalist Movement Party (MHP) will definitely support the reinstatement of the death penalty if it will be proposed in the parliament, the party's chairman said on Tuesday.

"MHP will do whatever is necessary if the proposal for reinstating the death penalty for such crimes is brought to the parliament," Devlet Bahceli stated, as cited by the Daily Sabah newspaper.

Fears for EU-Turkey Migration Deal Amid Media Crackdown, Death Penalty Push
Bahceli, who made those comments during his party's parliamentary group meeting in Ankara, explained that the attempted coup had damaged the political and social values in Turkey and new measures should be applied to straighten things up and to combat the threat posed by the perpetrators of the coup and terrorists.

There is no need to wait since the majority of the Turkish people are in favor of reintroducing the death penalty, he added.

The death penalty was banned in Turkey in 2004 as part of Turkey's attempt to get closer to the European Union. However, after the attempted coup in July 15 in Turkey, voices requesting the reinstatement of the death penalty have been on the rise.

Erdogan Vows Death Penalty for 18,000 Arrested for Mutiny Citing Will of People
The proposal to reinstate the death penalty is expected to be discussed in the Turkish parliament in the near future.

In July, Turkish President Recep Tayyip Erdogan said the country would reinstate the death penalty if the nation demanded it, following the July 15 failed coup, which resulted in the death of 240 people and injured around 2,000 more.

Ankara has accused Islamic cleric Fethullah Gulen, who has been living in the US state of Pennsylvania since 1999, and his followers of playing a key role in the coup.