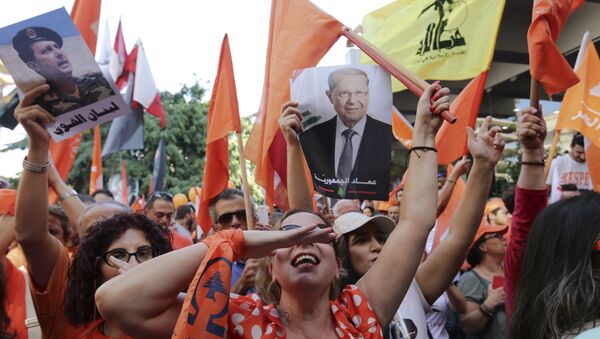 © AP Photo / Hassan Ammar
Subscribe
International
India
Africa
On Monday, Gen. Michel Aoun was elected president of Lebanon by the country's parliament following a political stalemate that dragged on for over two years. Sputnik spoke to several lawmakers about the implications of Aoun's election for the country's political, social and economic development.

83 out of 126 voting lawmakers cast their ballots for Aoun on Monday, giving the 81-year-old former prime minister the necessary parliamentary majority. The vote was the 46th parliamentary attempt to select a new president.

Lebanon Elects New President, Ending Years-Long Political Stalemate
The country has been stuck in a political crisis for over two years, following the resignation of former president Michel Nouhad Suleiman in May 2014. Since that time and until Aoun's selection, the country was effectively left without a head of state.

The election of the new president has been broadly praised as a sign of hope that the country's long political crisis, which has exacerbated sectarian tensions and economic problems as well, will finally come to an end. Aoun was considered the leading candidate for the presidency throughout the 29-month parliamentary stalemate, and was backed by Hezbollah and the parliament's pro-Syrian parties.

Aoun's main rival, Samir Geagea, a member of the pro-Western March 14' Alliance parliamentary bloc, enjoyed the support of Future Movement, a major Sunni parliamentary bloc, until October, when party leader Saad Hariri indicated that he would throw his support behind Aoun, presumably in exchange for the prime minister's spot.

Speaking to Sputnik, Abbas Hashem, a lawmaker from the Free Patriotic Movement, Lebanon's second-largest parliamentary party and the main pro-Aoun party, explained that the election of the new president is a symbol of Lebanon's drive for development.

"The new era will reflect a picture of Lebanon rising," Hashem said. "For a long time now we have lost our drive for development, and the new president will help us live up to the expectations of the people. But we must also remember that while something can be destroyed very quickly, building it back up again can take a long time."

Lebanon Opens 'Good Chapter' by Electing General Aoun, But More Should Be Done
Fellow Free Patriotic Movement MP Amal Abou Zeid suggested that Aoun's election should be seen as a celebration, since it should help bring Lebanon back from the political abyss. "Michel Aoun will open a new page in the history of the creation of a state of laws and service of the people," the lawmaker noted. "We look forward to an era where there will be no obstacles for development."

Lawmakers explained that the current festive mood in the country is associated with a reconciliation of opposing political blocs and movements within the parliament after a long period of political turmoil.

MP Nabil Naqula called the election something akin to a marriage celebration, with a country that had been "orphaned" for two years finally receiving its head of state.

"This is a wedding for Lebanon," the lawmaker noted. "After all, we were finally able to agree on the president who can meet the demands of all Lebanese citizens. This time, everyone [lawmakers, citizens] will try to work in a consolidated manner to deliver the people from crisis. We will work on doing so with the new president."

Mix of Histories and Cultures: Breath-Taking Sights of Lebanon
Finally, parliament member Agope Bagradonian suggested that Aoun's election is an indication that Lebanon will finally turn the page in a 'depressing' chapter of its history.

"The agreement of all the parties in Lebanon will be a symbol of a new era. General Aoun is worthy of the state, and is a good mediator in [inter-confessional] dialogue. We have a lot of work to do, including reforms, changes, compensation for losses in past years, and so on," Bagradonian explained.

Having been elected, the new president-elect's first task will be the potentially difficult process of forming a cabinet which accounts for the Middle Eastern country's complicated ethnic and confessional makeup.