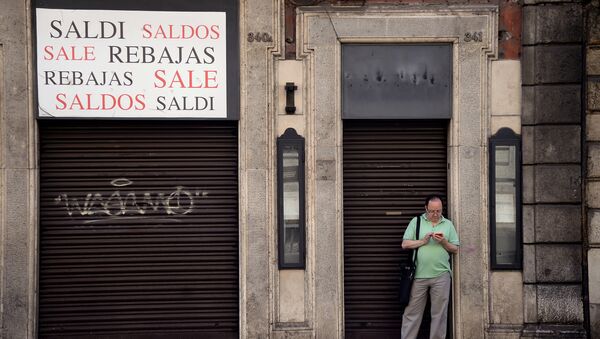 Brussels Should Abandon 'Absurd Anti-Russian Sanctions', Re-Connect With Moscow
The past few months have seen more Italian entrepreneurs go bankrupt because of the prolongation of the anti-Russian sanctions endorsed by Prime Minister Matteo Renzi's government.

Renzi has repeatedly underscored the importance of the 'Made it Italy' project, which he says is adding to the country's political image.

It seems, however, that he does not deem it necessary to think about the actual fate of everyday entrepreneurs who have been finding it difficult to cope with exorbitant taxes, and who are currently being forced out of business due to the anti-Russian sanctions.

In an interview with Sputnik Italia, young Italian entrepreneur Diego Marchiori, who had to close his family business finishing elite Ecolux furniture, specifically pointed to the implications of anti-Russian sanctions.

Notably, he had earlier posted an appeal to the Italian government titled "My company closes: thanks, Renzi!" on the website lofficina.org, which has already been viewed by more than 1.5 million Internet users.

"Our company, like others, immediately felt the effect of the anti-Russian sanctions because the ruble depreciated and the number of orders fell. The sanctions led to a sharp decline in profits, and in October 2016 I, along with my father, decided to close the company due to a lack of orders," Marchiori said.

'Wounded Vanity' Motivates EU Politicians to Prolong Anti-Russian Sanctions
He added that ahead of their company's closure, he had to live on unemployment benefits and that their company cooperated more with customers from Eastern Europe than the United States.

"The Italian government imposed the anti-Russian sanctions without offering small business compensation, despite the fact that businessmen suffered heavy losses," he said.

According to Marchiori, he and his father tried their best to prevent the closure of their firm but finally surrendered after they were unable to find financing. Marchiori recalled that "there is a constant drop in production and a rise in unemployment" in Italy, which is why he sees "no prospects."

He said that he understands those entrepreneurs who are currently contemplating suicide and that the past few years have seen 710 suicides in Italy in connection with the economic crisis, something that Italian government prefers to turn a blind eye to.

"Closing a family firm forever is like seeing death of a close relative," Marchiori said.

He also said that it is pointless to turn to Prime Minister Renzi because he does not know "what else I could say to him."

"I'm doing my best to make MPs understand that the anti-Russian sanctions are a tragic reality for Italy, which will lead to unemployment and the destruction of small- and medium-sized businesses," he pointed out.

"I would rather appeal to [Russian President] Putin. I would tell him that we have nothing against Russian and Ukrainian people, and that we just want to live and work. And Europe for some reason creates enemies for us, following the logic we cannot understand," he concluded.

A Rotten Policy: Sour Polish Fruit Growers Protest Anti-Russian Sanctions
The European Union's main economic sanctions against Moscow are in place until January 31, 2017, and sanctions against some Russian citizens and legal entities are valid until March 15 of the same year.

Last month, Alexei Pushkov, a member of the upper house of Russia's legislature, said that the European Union may start gradually rescinding the sanctions against Russia in the spring of 2017, if the Syrian crisis does not escalate further.

He added that the fact that the latest EU summit hadn't resulted in a new round of restrictions on Moscow over the Syrian crisis demonstrated that the bloc lacks unity regarding the issue.

000000
Popular comments
Dear Mr. Marchiori, Although the things looks very complicate, in reality they are quite simple! The US Military-Industrial complex dislike peace cause is bad for business, therefore, using the Russia as a "warmonger" threat, they convince all European suckers to buy more military equipment & weaponry just to be "prepared"! The EU gov give a sh*t that thousands of businesses end up bankrupt, what really matter is to boost the orders for Lockheed Martin, Boeing, Garmin, etc. This is all about! The "great" EU nation is in fact a humble lackey ready to do whatever the US Masters are asking for!
heit.7
1 November 2016, 11:40 GMT2
000000
Good idea and tell the US and UK to piss off - they're not suffering the sanctions.
Kombu
1 November 2016, 11:31 GMT1
000000
Newsfeed
0
New firstOld first
loader
LIVE
Заголовок открываемого материала
Access to the chat has been blocked for violating the rules . You will be able to participate again through:∞. If you do not agree with the blocking, please use the feedback form
The discussion is closed. You can participate in the discussion within 24 hours after the publication of the article.
To participate in the discussion
log in or register
loader
Chats
Заголовок открываемого материала
Worldwide
InternationalEnglishEnglishMundoEspañolSpanish
Europe
DeutschlandDeutschGermanFranceFrançaisFrenchΕλλάδαΕλληνικάGreekItaliaItalianoItalianČeská republikaČeštinaCzechPolskaPolskiPolishСрбиjаСрпскиSerbianLatvijaLatviešuLatvianLietuvaLietuviųLithuanianMoldovaMoldoveneascăMoldavianБеларусьБеларускiBelarusian
Transcaucasia
ԱրմենիաՀայերենArmenianАҧсныАҧсышәалаAbkhazХуссар ИрыстонИронауОssetianსაქართველოქართულიGeorgianAzərbaycanАzərbaycancaAzerbaijani
Middle East
Sputnik عربيArabicArabicTürkiyeTürkçeTurkishSputnik ایرانPersianPersianSputnik افغانستانDariDari
Central Asia
ҚазақстанҚазақ тіліKazakhКыргызстанКыргызчаKyrgyzOʻzbekistonЎзбекчаUzbekТоҷикистонТоҷикӣTajik
East & Southeast Asia
Việt NamTiếng ViệtVietnamese日本日本語Japanese俄罗斯卫星通讯社中文（简体）Chinese (simplified)俄罗斯卫星通讯社中文（繁体）Chinese (traditional)
South America
BrasilPortuguêsPortuguese
NewsfeedBreaking
08:59 GMTPakistan Wants to Help Train Afghan Security Forces, Ambassador Says
08:52 GMTMadhya Pradesh Couple, Young Girl Forced to Dance With Bike Tyres Around Their Necks For Elopement
08:52 GMT2,500 Rhino Horns Torched in Indian State of Assam to Convey Anti-Poaching Message
08:23 GMTNo More Coal-Fired Plants Built by China Abroad, Xi Jinping Announces
08:22 GMTUkraine's Internal Affairs Ministry Says Shots Fired at Car of Zelenskyy's Aide Shefir
08:07 GMTVolcano Continues to Erupt on La Palma in Canary Islands
08:03 GMTIran Offers India Joint Commission on Afghanistan, Wants 'Preferential' Trade Pact to Be Finalised
08:00 GMTSenior US Army Official Says Russia ‘Primary Military Threat to Homeland’
07:59 GMTIndia's Modi Calls His Visit to US Opportunity to Strengthen Ties Between Countries
07:47 GMTMoscow Refutes Polish Claims About Nord Stream 2 Impact on Gas Price Spike, Source Says
07:40 GMT'Thousands' of Haitian Migrants Reportedly Released in US, Undercutting Biden Admin's Expulsion Vows
07:35 GMTIndia: Traders in BJP Stronghold Go on Strike as Big Retailers Enter Jammu and Kashmir
07:08 GMTBoris Johnson Calls Joe Biden a 'Living Deity'
07:00 GMTManager, Not Players, Is the Difference at the Top of Premier League
06:54 GMTPortugal Wants to Cooperate With Russia on Economic Crises, COVID-19, Refugees, President Says
06:53 GMTFinland's Burglaries Drop 40 Percent Amid COVID-19 Pandemic
06:41 GMTNumber of People Injured in Russia's Perm University Shooting Climbs to 43, Health Ministry Says
06:30 GMTUN Chief Guterres Got Letter From Taliban Requesting to Join 76th Session of General Assembly
06:27 GMTEgypt Condemns Failed Coup Attempt in Sudan, Backs Transitional Government
06:26 GMTUK, US Agree to Keep Approach to Russia, China Based on 'Shared Values', Downing Street Says