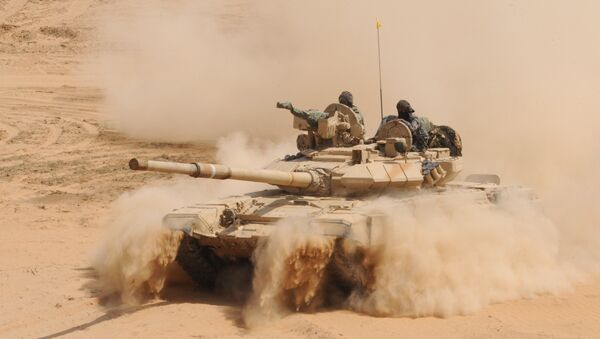 Indian Army intends to purchase advanced T-90 tanks from Russia. Experts believe that it is best suited for deployment along the western border.

Russia, India Make Progress in S-400 Systems, BrahMos Missiles, Ka-226 Choppers
New Delhi (Sputnik) – Furthering its defense cooperation with Russia, India is set to approve another high-value purchase from Moscow in next few weeks. Sources say that the Indian Army is interested in purchasing the latest version of T-90 tanks equipped with thermal imaging night vision cameras and some additional countermeasures to significantly reduce the chances of being hit by enemy anti-tank semi-automatic guided weapons. The Indian Army has submitted a proposal seeking final approval of the Defense Acquisition Council, the decision-making body for all India’s defense deals.

Major General R K Arora (retired), Chief Editor of Indian Military Review, says, “We have still not finalized what our future battle tank will be like. Secondly, the development of the Arjun Mark 2 is taking more time; so there is a gap between now and may be 5 years or so before the development of future main battle tank takes place. So, it is a stopgap measure that we are going to buy more T-90 tanks. We may have 800 or so T-90 tanks just now. Now the government is planning to buy 460 more that will make it about 1,300 T-90 tanks in the fleet.”

The intended purchase of 460 T-90 tanks would be worth more than $2.1 billion with the Make in India component. Sputnik reported  earlier that the Indian Army had put the T-90 on a list of products that domestic industry could help design and manufacture under the Army Design Bureau. The T-90 is already being assembled at Heavy Vehicle Factory (HVF), Avadi in the southern state of Tamil Nadu. The factory also produces T-72 tanks. It is not clear if the additional T-90 tanks will be produced by HVF or if the opportunity will be thrown open to the private sector.

“Transfer of technology was part of the original deal signed with Russia to procure T-90 tanks initially. The transfer took some time but now I think the technology is available. Therefore it has become possible to manufacture the tanks all by us with most of the sub-assemblies being manufactured locally and the rest still required to be imported getting replaced by indigenously produced sub-assemblies over a period of time,” he said.

Currently, India has about 13 regiments of T-90 that could go up to 21 regiments by 2020. One regiment consists of 62 tanks. In November 2006, India ordered 330 T-90 tanks from Russia, out of which some are assembled at an Indian ordnance factory. Indian assembled tanks are fitted with the Shtora self-protection system as well as Catherine thermal images from Thales of France and Peleng of Belarus.