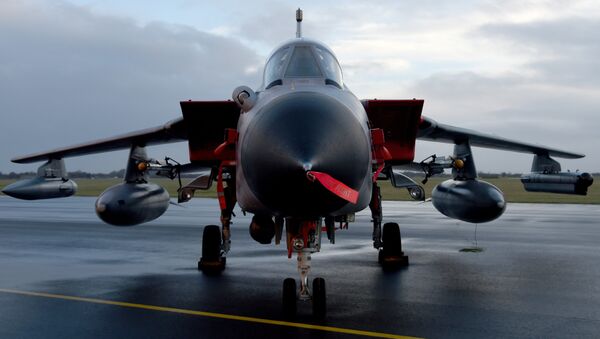 © AP Photo / Carsten Rehder
Subscribe
A pair of German Tornado jets had to make a forced landing in northern Iraq on Monday because of a technical defect, the German press has reported.

Leaked Bundeswehr Documents Say Germany Will Lack Combat Capacity Soon
The two jets had taken off from Turkey's Incirlik air base, before they had to land because of an "air emergency," the German Bundeswehr said on Monday evening, Der Westen reported.

"There is no reason to worry about the safety of the pilots," a defense ministry spokesman added on Tuesday.

According to the report, the jets ran into difficulty during strong turbulence, as one of the reconnaissance jets was attempting a routine air refueling. The aircraft pilots decided to land in Erbil, Iraqi Kurdistan, rather than return to the NATO base at Incirlik because of a lack of fuel.

The Bundeswehr reported that after landing in Erbil, it was established that the jet in question was still airworthy despite a defect in its fuel tank. Both jets refueled on the ground, and returned to the Incirlik base in the evening.

Following an appeal from French President Francois Hollande in the aftermath of the Paris terror attacks, on December 4 2015 the German Bundestag approved the provision of six German Tornados to carry out reconnaissance missions and aid the US-led coalition's campaign of airstrikes against Daesh in Iraq and Syria.

However, just days before the Bundestag vote, the Defense Ministry released a report revealing that only 29 of Germany's 66 Tornado jets in operation were airworthy.

Money Trouble: German Bundeswehr Can’t Afford New Tanks
The six Tornado jets taking part in anti-Daesh reconnaissance have suffered from several issues during their anti-Daesh mission. In January it was reported that the aircraft could only be flown during the day, because of a problem with the cockpit lighting.

Last month Germany's NRD news broadcaster reported that 39 of Germany's most modern Tornado aircraft had been grounded, including all six aircraft at Incirlik, because of loose screws on a screen in the cockpit.

As well as the Tornados, the German parliament also approved the provision of Germany's "Augsburg" F122 Bremen-class frigate, an Airbus aerial refueling tanker aircraft and up to 1,200 troops in support roles for the US-led coalition. The parliament approved a one-year mandate for the operation, scheduled to end December 31 this year.

Later this month, the Bundestag is set to vote on the expansion of Germany's participation in the anti-terror campaign. The defense ministry is proposing to deploy more German military pilots in NATO AWACS reconnaissance aircraft, in order to support air strikes against Daesh in Iraq and Syria.