Can Clinton's Lead Over Trump Be Trusted and is the 'System Rigged'? 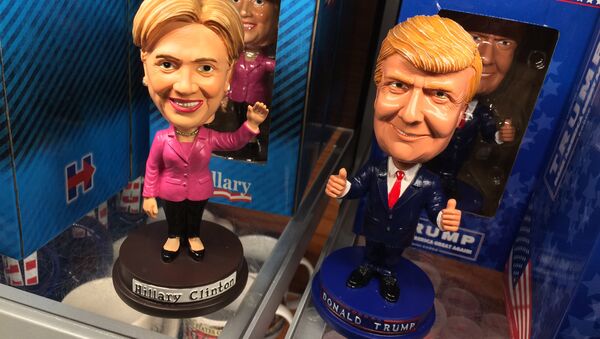 How correctly are US opinion polls reflecting public opinion before the presidential elections?

WASHINGTON (Sputnik) — Opinion polls a week before the November 8 US presidential election continue to indicate that the Republican nominee Donald Trump is trailing behind his Democratic rival Hillary Clinton, while Trump and his supporters claim that the election is rigged in Clinton’s favor.

"Remember folks, it's a rigged system. That's why you've got to get out and vote, you've got to watch. Because this system is totally rigged," Trump said at a rally in Pennsylvania. In a recent interview, he added that the public opinion polls showing Clinton's lead in a majority of swing states were also rigged.

"I'm winning in certain polls, and then in other polls, the dirty polls we call them, I was losing by, you know, numbers that were ridiculous … The only one I really like are the ones where I'm winning," Trump told Fox News.

Trump supporters maintain that pollsters are fabricating results to create the outcome they want. "We are now living in a fake reality of constructed data and phony polls," Roger Stone, a veteran of Republican campaigns since Richard Nixon and now a Trump supporter, writes in The Hill. Since it is difficult to disprove that polls more or less accurately predict the outcome of elections, Stone claims that the election is being rigged at all levels in order to match the faked polls, but experts do not take this idea seriously.

US Elections Being Routinely Rigged is an 'Ordinary American Thing'
Yet there are doubts about the accuracy of polling throughout the country this year. Dozens of Republican officials interviewed by Politico believe that pollsters are either using incorrect methodology or Trump voters do not want to admit their support for him for some reason. They do not invoke conspiracy theories in support of this view, but still think it is possible that the pollsters are wrong.

Historical data does not confirm the existence of a conspiracy of pollsters in favor of the Democrats. The founder of analytic website FiveThirtyEight Nate Silver looked into forecasts made for the 2012 presidential election by 22 top pollsters and found out that only four polls were biased toward Democrat Barack Obama winning, while the rest favored Republican nominee Mitt Romney. When he expanded the sample to 90 companies, only 16 of them were found to consistently overstate Obama’s support. Obama went on to win by a big margin.

The suspicion was created by emails of Clinton presidential campaign chairman John Podesta, which showed that Clinton’s 2008 campaign requested polls that "oversample" Spanish-speaking citizens and Native Americans in Arizona.

"I also want to get your Atlas folks to recommend oversamples for our polling before we start in February. By market, regions, etc. I want to get this all compiled into one set of recommendations so we can maximize what we get out of our media polling," Clinton representative Tom Matzzie wrote.

However, some political scientists insist that this was an internal poll solely designed to target key groups of Democrats.

"The oversampling of Democrats that Trump talks about are internal polls that Democrats use to decide what ads to run in which states. They oversample minorities because if the numbers are too small, the results are not reliable. However, the oversample is not used in conjunction with other data to make election outcome predictions," Cary Covington, an associate professor of political science at the University of Iowa, told RIA Novosti.

In fact, all poll tracking websites exclude polls done by the parties for fear they may significantly distort their results.

How One Vote for Trump Skewed a National Poll

World
Saving Face: 'West's Attitude to Crimea Will Not Change' After US Elections
No poll is released until the raw data is processed. In a random poll, the demographic makeup of respondents usually does not match census data. As a result, polls are weighted to more accurately reflect the composition of the electorate. For instance, African-Americans make up 13% of the US population but in a random sample of 1,000 people there might be just 65. By weighting one African-American vote to count for two white votes, the pollster gets a picture that better reflects the actual electorate, though this results in the responses of some participants counting more. The same technique is used for all demographic groups.

However, the statistical technique failed the University of Southern California (USC), which regularly polls the same group of 3,000 voters for the Los Angeles Times. This has been the only national poll to show a consistent lead for Trump. As data journalist Nate Cohn discovered, the pollsters had gone too far in weighting. To make the survey as representative as possible, they divided the sample into too many groups. As a result, the only African-American, a 19-year-old from Detroit, was weighted 30 times more than the average respondent, and as much as 300 times more than the least-weighted respondent.

Unfortunately for USC, the young man is going to vote for Trump, compared to the over 90 percent of black voters who support Clinton in other polls. So, his vote strongly shifted the balance of the poll in Trump’s favor and even affected polling averages. Clinton took the lead as soon as this Trump supporter was removed from the sample.

"The weighting problem is actually unique to the LA Times/USC poll, which is the only one systematically favorable to Trump," Covington said.

Other experts shared the view that the LA Times poll was an anomaly.

"The LA Times poll methodology (one of the few polls where Trump is often in the lead) is suspect, and not following some generally accepted approaches," David Redlawsk, a political science professor at the University of Delaware, believes.

Mack Shelley, a professor and the chair of the Department of Political Science at Iowa State University, described the poll as a major distortion.

"The LA Times tracking poll is notorious for having a single African-American Trump supporter who is given vastly disproportionate weight that does produce a major distortion," he said.

Is Another Brexit Possible?

Polling is a relatively new science and polls are still not entirely reliable. There is not much precedent – only in the past few decades have the majority of polls correctly predicted the outcome in the majority of cases.

Trump: Republican Victory in US Election to Have Impact of Brexit Times Five
Trump likes to bring up Brexit to his supporters. Indeed, only toward the end did polls start showing Brexit in the lead. In 2000, the extremely narrow margin in the decisive state of Florida prevented pollsters from accurately predicting the outcome of the presidential election. During the 2014 midterm election, pollsters underrated the Republicans who won control of the Senate. During the 2012 presidential election polls underestimated Obama’s eventual margin by 2-3 points, though they did show him winning.

Statistically, averages of many polls are more precise than any individual poll. "Of course, any one poll is questionable, but taking the polling average, like the 538 and RealClearPolitics websites do, lessens the impact of those statistically possible but unlikely outliers and combines them with the bulk of polls that predict very similar results to give us very reliable predictions of a Clinton victory," Covington said.

Kirchner: US Citizens to Vote 'for the Lesser of Two Evils'
The professor added that Trump is either being misled or deliberately misrepresenting the polls since poll averages show a clear Clinton lead that Trump is unable to overtake in the final stretch of the campaign.

The interview with Covington was conducted before it became known that the Federal Bureau of Investigation (FBI) is continuing its investigation into Clinton’s emails. This was a blow to her campaign but has not yet significantly affected predictions. According to FiveThirtyEight, the email scandal reduced Clinton’s chance of victory from 87 percent to 80 percent, which is still a significant lead. The New York Times continues to put her odds of winning at over 90 percent. Pollsters deal in probabilities because it is impossible to definitively predict a result.

"No, the polls are not rigged in any way. There can be ‘herding’ effects, but normally they do not show until the very last polls, if at all. All of the signals (with small exceptions) point the same way," Redlawsk said.

Ultimately, polling can only detect trends and do not always capture the rapidly changing preferences of voters. "A ‘Brexit’ surprise result is possible, and polls always are off from election results to some extent, but such an outcome in the U.S. presidential election would require a massive shift of independent voters to Trump combined with higher turnout rates among Trump’s supporters," Shelley said.

The professor stressed that while polls are not deliberately rigged, there is a chance that they can miss late-breaking trends or rising passions among voters that can lead to higher turnouts when it comes to Election Day.