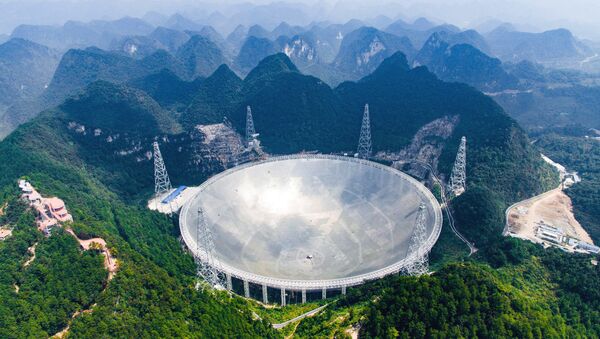 The largest single-dish radio telescope in the world, located in China’s southwestern Guizhou province, will explore the mysterious flickering ‘Tabby’s Star’ in the hope of discovering if it was indeed the creation of extraterrestrial intelligence.

Science & Tech
'Eye of Heaven' Telescope May Make 'China World Leader in Search for Aliens'
The SETI (Search for Extraterrestrial Intelligence) Research Center at the University of California, Berkeley, announced this month that it has teamed up with China’s giant FAST radio telescope in an unprecedented effort to find traces of an advanced civilization in space. The name of the recently-completed Five-hundred-meter Aperture Spherical radio Telescope (FAST) speaks for itself. With a diameter of 500 meters, the telescope is nearly 200 meters wider than the famous US-operated Arecibo Observatory in Puerto Rico.

The enormous tool will soon fall into the hands of researchers busy with the Berkeley center’s $100 million Breakthrough Listen project, founded last year by Russian tycoon Yuri Milner. “Breakthrough Listen recently entered into a partnership with FAST and the National Astronomical Observatory of China,” which built and operates the telescope, said co-director of Breakthrough Listen, Andrew Siemion.

The ten-year initiative aims to discover signs of alien civilizations by searching stars and galaxies for radio signals and laser transmissions. Currently the project is focused on an unusual star, officially called KIC 8462852 and located about 1,500 light years from Earth, which in recent months has drawn the attention of the world's brightest astronomers and captivated imaginations around the world.

The star’s less formal names are WTF Star and Tabby’s Star, after Tabetha Boyajian, then a postdoctoral researcher at Yale University, who was the first to discover irregular changes in the brightness of the star that differed from the normal dimming of other stars caused by orbital planets or comets. Those irregularities prompted theories that the blocking could be caused by some alien-built energy-collecting megastructure.

Are Alien ‘Megastructures’ Making a Distant Star Look Weird to Astronomers?
A Dyson sphere is a hypothetical megastructure that completely surrounds a star and captures most or all of the power it generates. The discovery of such a sphere would signify that a hyper-civilized alien race had developed such a mega-structure. Theoretically, humans or extraterrestrials could live on the inside of such a giant artificial shell.

In late October, Breakthrough Listen began zooming in on the flickering star with some of the world’s biggest telescopes, such as the Green Bank Telescope and the Parkes Telescope, but failed to find an explanation to the mystery. With FAST, the project will get another chance.

“The FAST telescope will be absolutely incredible for conducting extremely sensitive searches of Tabby’s Star for evidence of technologically produced radio emissions,” Siemion said. “Within its frequency range, FAST is the most sensitive telescope in the world; it's capable of conducting SETI observations of Tabby’s Star, and will be able to detect the weakest signals.”

A researcher in Beijing involved in the joint effort said China was looking forward to use FAST in its search for aliens, but noted that the telescope’s schedule was understandably too busy and that finding a spot for the non-urgent alien hunt would take some time.