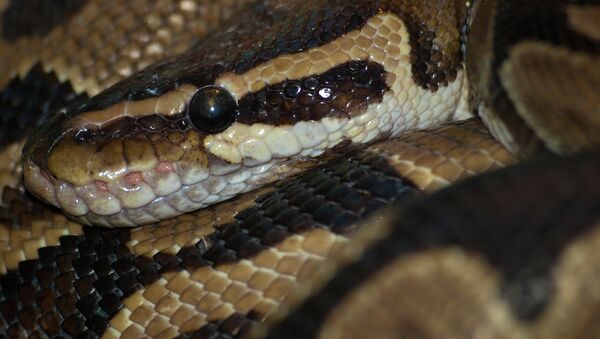 © Flickr / William Warby
Subscribe
International
India
Africa
The pet shop keeper is facing trial three years after an African stone python killed two children who were having a sleepover with his son.

Sss-cary! Deadly Two-Meter African Snake Found in Southeastern Europe
Jean-Claude Savoie is facing charges of criminal negligence causing death after a 14-foot-long African rock python asphyxiated two boys, aged 4 and 6, who were having a sleepover with his son. Despite the fact that the case has been initially classified as a tragic incident, the Royal Canadian Mounted Police arrested Savoie in 2015. One month after the arrest Savoie was charged with criminal negligence for not preventing the deaths.

According to media reports, Savoie occupied an apartment right above his pet shop, Reptile Ocean. On the third floor of the house, a special confinement was made where a python was kept. It is believed that the python escaped the confinement and slithered into the building's ventilation system through an uncovered hole where a ventilation fan had been removed for maintenance. The ventilation collapsed under the 100-pound weight of the python and the serpent fell somewhere near where the kids were sleeping. Next morning, both boys were found dead of asphyxiation.

According to Crown Attorney Pierre Roussel, an employee of the ventilation maintenance company warned Savoie that the hole where the malfunctioning fan was must be covered. However, Savoie neglected to take care of the hole, the Toronto Sun reported.

According to reptilian zoo facilities manager Lee Parker, "they don't go on killing sprees. It doesn't make sense to me."

Some reports indicate that Savoie was found by police with blood on his hands. However, the autopsy indicated that the cause of death was asphyxiation, rather than injury. That the tragedy was a homicide has been ruled out by the Canadian police.

According to Kentucky Reptile Zoo director Jim Harrison, the boys visited a farm the day before their death, where they handled a variety of farm animals and therefore may have smelled like food to the snake.

African rock pythons have been banned in Canada since 1992, when another animal killed a 28-year-old man in the town of Brampton. Savoie was able obtain the snake because his pet shop has been legally registered as a zoo. Federal officials brought the snake to Savoie after it was abandoned at a nearby Society for the Prevention of Cruelty to Animals (SPCA) office. The officials were unaware that the serpent was in fact kept in an apartment room, according to Environment Canada.

Savoie is facing a maximum punishment of life in prison, according to Newser.com