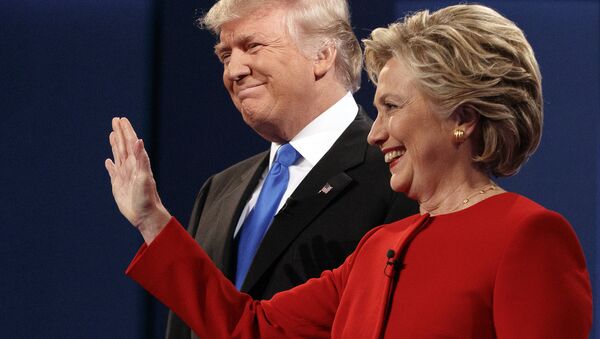 US presidential elections scheduled for November 8 will have an effect on the global economy that, however, will be limited due to formation of new economic centers, experts told Sputnik.

Clinton's Presidency 'to Resort to Outright Destabilization' in Asia Pacific
WASHINGTON (Sputnik) – Two rivals in the presidential race – Democratic nominee Hillary Clinton and Republican candidate Donald Trump – are taking opposite approaches toward economic policy. Trump strongly opposes globalization of economy while Clinton is dreaming of the world without borders, according to her emails issued by the whistleblowing website WikiLeaks.

If elected, Trump vows to reconsider all global trade agreements that the United States has ratified or is negotiating now. For example, he criticizes the North American Free Trade Agreement (NAFTA) signed by Hillary Clinton’s husband, former President Bill Clinton, in 1994. Trump believes that the free trade agreement with Canada and Mexico gave an opportunity to US companies to relocate their production to these two countries, especially in Mexico, which deprived US residents of millions of jobs.

He opposes the Trans-Pacific Partnership (TPP) agreement that would join the United States with 11 Pacific Rim nations in a deal to lower tariffs and other trade barriers on thousands of goods and services. He said that the deal would be profitable for China that would not be its part.

Trump also criticizes the Transatlantic Trade and Investment Partnership (TTIP) with the European Union that is being negotiated now, saying that he would rather sign bilateral agreements.

His views came under fire, with International Monetary Fund (IMF) Managing Director Christine Lagarde saying that his victory in the presidential elections would have negative consequences for the global economy.

"Looking forward, a Trump victory would probably maintain a high level of policy uncertainty – both US and global. Investors indeed would wonder about the degree of implementation of his radical proposals: tax cuts and infrastructure spending threaten fiscal stability, while his protectionist and isolationist bias would hurt international trade and foreign direct investment. Those threats however would largely be global rather than US-centric – the impact on the USD is less clear," the French bank Societe Generale said in an analysis of the coming US elections.

Rejecting TPP Deal Would Hinder US to Advance Objectives in Asia Pacific
Trump wants to support US business in the United States, shifting the focus from the global trade to national economic development. In his addresses, Trump said that the US GDP was increasing also by 1 percent per year while the Chinese GDP – by 6 percent and India's GDP – by 8 percent. He called it stagnation and promised to fight the tendency in case of his victory in the presidential elections.

In order to simulate the growth of the US economy Trump is going to decrease the taxes in the United States, which from him point of view are one of the highest taxes in the world. He also criticized Clinton for her plans to increase taxes.

According the forecast of Societe Generale, Clinton is likely to win the elections but the experts do not rule out the so-called Brexit effect – when British population voted for leaving the European Union despite opposite prognoses.

Clinton’s victory will stimulate the US stock market, which is crucial for the whole global economy.On the contrary, Trump’s victory may lead to economic destabilization.

"We see a very real chance for a recession in the US. A Trump victory would probably induce a stock market sell-off and push the economy into an early recession due to his policy leanings toward protectionism and trade wars," Senior economist of Smith`s Research & Gradings Scott McDonald said.

Clinton’s victory, however, will not lead to solving economic problems and stabilization of markets, according to experts.

"If Hillary Clinton wins the race, the stock indexes and dollar may rise bit in the mid-term they will fall – especially amid the lack of clear program of reforming actions and tightening of monetary policy by the Federal Reserve System (FRS). Under this scenario I am expecting a rather tough but short-term correction in February – March 2017," Vladimir Rozhankovsky, Nord Capital's former head of research and Russia’s leading international economy expert, said.

According to other experts’ evaluations, the US economy is completing a cycle now, which will end with a crisis. Home prices, which are the main trigger of this process, have already overheated reaching the pre-crisis level.

"Whoever wins in November faces a sluggish global economy, growing protectionist headwinds and problematic geopolitical issues, including the poor state [of] US-Russian relations. We see a very real chance for a recession in the US," McDonald said.

Trump, Clinton Go Neck-and-Neck in Presidential Race - Poll
He believes that Clinton’s economic policy would lead to increasing bureaucratic burden on US business.

"Clinton economic policies are not likely to be pro-business and a number of sectors will find themselves hit by more rules and regulations such as banks, finance, insurance companies, pharmaceuticals, energy and mining," McDonald said.

He added that the shock caused by Trump’s victory could be positively compensated if he could invite experts to his cabinet.

"I would add that once past the initial shock of a trump win, he might surprise to the upside if he was able to bring top quality people into his cabinet," the expert said.

Clinton is likely to continue the policy of President Barack Obama that implies increasing social expenditure. Such policy may be backed only by expanding the national debt or increasing taxes. At the same time national debt is one of the most urgent problems of the US economy.

Now the US national debt exceeds $19.5 trillion or 105 percent of the country’s GDP. During eight years of the Obama presidency it has almost doubled from $10.63 trillion. However, that was not considered as a problem as the economy grew by 3 percent per year and FRS maintained low refinancing rates (0.25 – 0.5 percent).

Obama to Leave Behind $20 Trillion National Debt
The situation changed in the second quarter of 2016 when the US economy showed only a 1.2-percent growth. Moreover, in order to avoid the liquidity crisis FRS may decide to increase the refinancing rate, which will automatically increase the debt servicing costs.

According to the Bipartisan Policy Center, the US debt will reach record $20.1 trillion two months after the presidential elections. The new leader will face the necessity to explain to the Congress the reasons for a new increase of debt ceiling.

Each kind of restructuring of debt or even speculations about that is a blow to the global economy. Now states are saving about $6.3 trillion in US obligations – about 10 percent of the word GDP. Devaluation of these obligations is possible if the US resorts to emission of currency in order to service its debt. Trump did not rule out such possibility.

He also criticized FRS for delaying the rise of the refinancing rate in order to ensure Clinton’s victory. So, the rate is expected to increase after the elections, the economy will slow down and the debt issue will need to be solved.

"The correlation is likely to be the following: the rate will be increased and the value of dollar will rise. So, the price of most commodities will be under pressure. That will also lead to the pressure on commodity currencies including ruble and partial capital outflow to developed countries … For US companies that will mean that prices for the goods produced in the United States would increase and the US export which is already 30 percent lower than the US import will further decrease. It will me more profitable to produce goods abroad and that will lead to outflow of jobs from the United States to developing countries," Russia's trade representative to the United States, Alexander Stadnik, said.

OPEC Confirmation of Oil Freezing Deal to Depend on Iraq, Iran
OIL GAMBIT

US policy aimed at reducing harmful emissions from fossil fuels will also be important for the global market. Clinton is known to fully support the Paris Climate Agreement.

The agreement, part of the UN Framework Convention on Climate Change, is designed to take effect one month after being ratified by 55 signatories representing 55 percent of worldwide greenhouse-gas emissions. A total of 83 countries have already ratified the agreement, which is regarded by the Obama administration as one of the most significant achievements.

Trump criticized this policy saying during the presidential debates in St. Louis, Missouri that the energy branch was under siege during the Obama presidency.

Because of the administration’s aspiration to reduce harmful emissions as soon as possible, consumption of coal became unprofitable. Such giants as Arch Coal and Peabody Coal turned bankrupt. Experts expect that the next "crusade" will be against the oil branch.

"If Hillary Clinton wins the US Presidency, the outlook on all fossil fuels looks bad. She fully supports the Paris Accords which calls for the decarbonization of all fossil fuels. The advice she has received from Podesta and others is that the US and other parts of the world can go to 100% renewables … Should she become President she will press vigorously this same shut down in Nigeria, Europe and Norway as well. All of this under the guise of combating global warming and climate change. For Russia and Saudi Arabia, it is likely she would press for high import duties for ‘dirty’ fossil fuels," Fearn Oil Vice President Michael Moore said.

The United States as the world economic center will continue to develop and dictate its terms to the whole world, but its influence will decrease. Ian Bremmer, the president of the Eurasia Group consulting firm, published a report earlier this year claiming that the global economy would witness significant changes with emerging new economic centers such as China and India.

Bremmer noted that new economic models were being created and the United States would not play such a significant role in the future. He added that the United States itself is responsible for the destruction of the Bretton Woods system as it was dictating its rules of the game to other countries too actively.