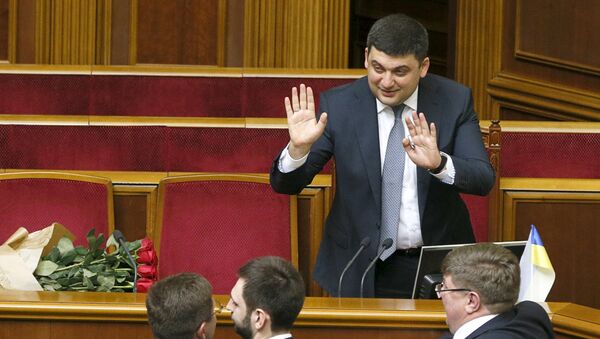 Now that Kiev politicians have been forced to publicly declare their wealth, Ukrainians are outraged by the clear excesses displayed by the country’s elite.

As Ukrainians suffer under an economic crisis, public officials have been forced to disclose their personal fortunes online as part of anti-corruption efforts.

"When the Economy Ministry says that in some areas around 60 percent of the economy is in the shadows, then this is accounted for by the volume of cash registered by civil servants, officials and lawmakers," said Taras Kachka, deputy executive director at the International Renaissance Foundation.

"This is a reflection of the state of our society."

Prime Minister Voldymyr Groysman was among those shown to be in possession of a vast fortune well beyond the means of most public figures. The new database shows that he and his wife have a total of $1.2 million and 460,000 euros in cash, as well as an extensive collection of luxury watches.

Pavlo Petrenko declared $1.5 million, with roughly one third of that in cash. He attempted to blame this need for cash money on general distrust of the banking industry, despite the fact that in his position as justice minister Petrenko could, conceivably, bring reform to the system.

"Of course to EU countries it seems uncivilized that people hold cash," he said.

"But it is linked to the fact that the banking system could, let’s say, be doing better. This is a problem for many Ukrainians who lost their savings in the bank."

Lawmaker Mikhail Dobkin was shown to have a collection of 1,780 bottles of wine, as well as a $5,500 copy of the novel Anna Karenina. Roman Nasirov, head of the State Fiscal Service, declared an assortment of fur coats, diamond jewelry, and luxury watches, in addition to $2.2 million in cash.

Many citizens are, understandably, outraged.

"We did not expect that this would be such a widespread phenomenon among state officials," said Vitaliy Shabunin, head of the non-governmental Anti-Corruption Action Center.

"I can’t imagine there is a European politician who invests money in a wine collection where one bottle costs over $10,000."

Roman Donik, a volunteer soldier, said he felt betrayed by the revelations.

"I personally feel unwell," he said. "Or rather, like someone who has been beaten and is therefore unwell. I had no illusions about our political and official elite. But all the same, what’s come out is beyond the pale."