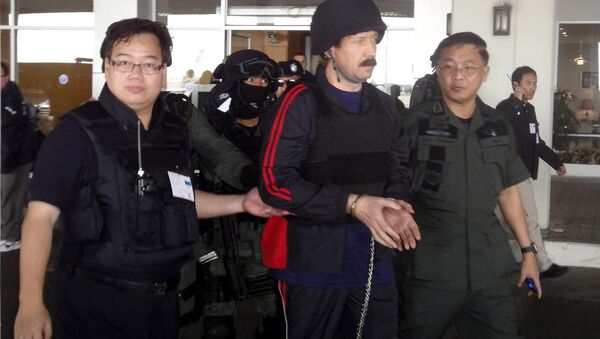 The retirement of the US judge who denied appeal in Russian businessman Viktor Bout's case holds out hope for reopening of court hearings, Bout's attorney Alexey Tarasov told Sputnik in Monday.

US Court to Decide on Russian National Bout Appeal Soon - Attorney Tarasov
NEW YORK (Sputnik) — "Our previous appeal last year has been rejected on the grounds of lack of substantial evidence, but the judge in charge of that decision has shortly afterwards resigned. We are hopeful and look for fair and just ruling," Tarasov said.

On Monday, Tarasov presented newly discovered evidence in front of US Court of Appeals in Manhattan. The legal defense's central argument revolves around the claim that Bout's alleged co-conspirator, Andrew Smulian, was in fact a government informant.

"There is a 2014 documentary on the subject, where special agent William Brown confirms that Smulian was acting on behalf of the US and British governments in an operation against Bout," the attorney explained.

The timeframe for court's decision in regard to the appeal remains unknown, according to Tarasov. The lawyer said it may take weeks or months until they hear from the judge.

Bout was arrested in Bangkok in 2008 in a joint operation between Thai and US authorities, who accused him of conspiring to kill Americans by allegedly agreeing to supply Colombian militants with weapons.

The Russian Foreign Ministry believes that the case has been politicized and has repeatedly called on Washington to release the Russian citizen, who is serving a 25-year sentence in the United States.