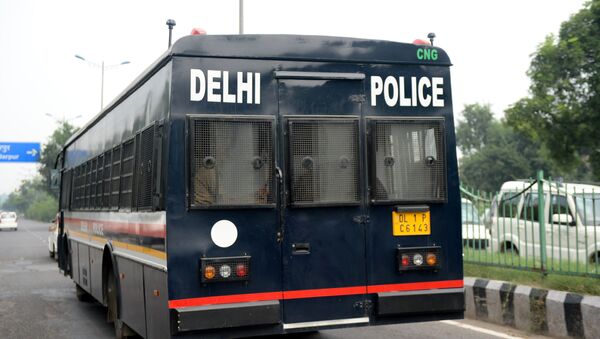 © AFP 2021 / PRAKASH SINGH
Subscribe
Eight men from the Students' Islamic Movements of India (SIMI) were killed in an encounter with police; they were apprehended hours after having fled from a high security prison in central India, killing a prison guard.

New Delhi (Sputnik) — A major controversy has erupted over the killing of eight members of SIMI, a banned students group. Politicians and social activists doubt the official police story of how they killed these alleged SIMI men following their escape. Madhya Pradesh Police have hunted down and eliminated all of the alleged terrorists on outskirts of the city from where they had managed to escape in the wee hours of Sunday morning.

“Eight inmates related to SIMI escaped from Bhopal Central Jail between 2 and 3 A.M. today. They used their blankets to make a rope and crossed the bigger wall of the jail. They also killed one security guard, Ramashankar Yadav. All of them were accused of various crimes such as bank robbery, murder, and sedition," senior police officer Yogesh Choudhary told reporters.

​Senior parliamentarian Asaduddin Owaisi of AIMIM has demanded a judicial enquiry into the incidents. “The state home minister and police have given different versions of the encounter. I asked if the state Chief Minister should ask Supreme Court to probe the matter as there are so many things which raise skepticism when it comes to police claims,” says Owaisi.

​Another parliamentarian, Communist Party of India leader Brinda Karat says, "Don't call them terrorists. They were being tried, not convicts. An independent inquiry under a High Court Judge is the need of the hour."