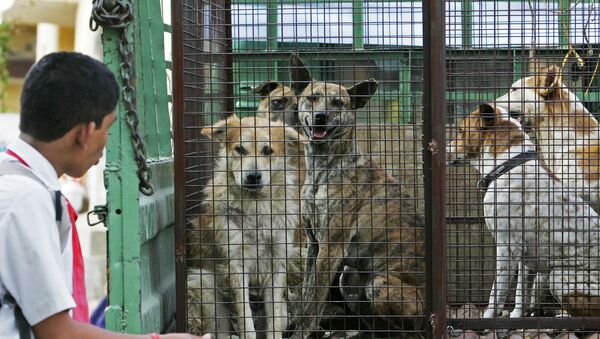 © AFP 2021 / DIBYANGSHU SARKAR
Subscribe
Despite being offered prizes and incentives, the majority of Indians are too kind-natured to kill forsaken pets and primates.

New Delhi (Sputnik) — In what could be seen as worrying trend by animal rights activists, Indian states and organizations are offering gold coins to those who cull stray dogs; cash incentives have been doubled for those who kill monkeys. Kerala, India’s most educated state in terms of literacy rates, has announced a state policy for the culling of stray canines in the wake of several recent  violent attacks, perpetrated by packs of wild dogs.

The Old Students' Welfare Association of St. Thomas College in Kerala vowed to offer gold coins to the civic authorities that kill the most stray dogs. "We are planning to give the gift (gold coins) to Panchayat presidents (Local Administrative Bodies) and municipality chairmen in the state who lead in killing the maximum number of stray dogs by December 10. Our aim is to ensure the safety of people from violent canines," James Pambaykkal, the association's General Secretary told the news agency Press Trust of India. Earlier, the association had offered subsidies to purchasers of air guns who killed dogs. Meanwhile, more than 120 dogs have been killed in the last few weeks.

In the last four months, the southern Indian state has witnessed over 700 injuries due to dog attacks. In August, a 65 year old woman was bitten to death by a pack of more than 100 stray dogs. It is estimated that state has more than 250,000 street dogs, whose exponential growth in recent years has been blamed on the availability of marine waste and apathy of local administrations in disposing garbage. More than 127,000 people were attacked by packs of stray dogs in Kerala in the last year alone, according to official statistics.

Meanwhile, in the northern Indian state of Himachal Pradesh, the state government has increased cash incentives for catching monkeys for sterilization to $10.49 from the current prize of $7.49. If a person is able to catch a monkey in a herd, he can receive a prize of up to $15.

The government of Himachal Pradesh has spent $ 3 million catching monkeys for sterilization so far. The state has declared Monkeys 'vermin', as they are responsible for the destruction of crops. Vermin are wild animals which are believed to be harmful to crops, farm animals, game or which carry diseases; it's therefore legal to kill them in India.