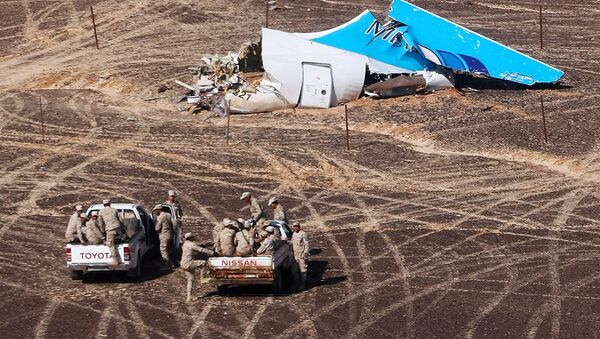 Egyptian ambassador to Russia stated that government and people of Egypt extend sincere condolences to the families of those who died in the 2015 Russian A321 plane crash over the Sinai Peninsula.

Putin Vowed Retribution for A321 Attack; One Year On, Moscow's Not Backing Down
MOSCOW (Sputnik) – The government and people of Egypt extend sincere condolences to the families of those who died in the 2015 Russian A321 plane crash over the Sinai Peninsula, mourning with them and promising their loss will never be forgotten, the Egyptian ambassador to Russia told Sputnik on Monday that marks the first anniversary of the tragedy.

"On the anniversary of the big tragedy, I would like to present my condolences to all Russians and to the families of the victims and tell them that their loss is not forgotten and it will not be forgotten by the Egyptian people and by the Egyptian government," Mohamed Elbadri said.

He noted that several hundred people took part in a mourning procession in Egypt's Sharm el-Sheikh on Sunday to commemorate the victims of the Russian aircraft crash. The ceremony was attended by Egypt's Minister of Civil Aviation Sherif Fahti, Governor of South Sinai Governorate Khalid Fuda, Egyptian lawmakers and representatives of the world's biggest Islamic University Al-Azhar and the Coptic Orthodox Church.

Elbadri reiterated Egypt’s commitment to fight terrorism expressing hope that regular air service and free movement between the countries would be soon resumed.

"The Egyptian-Russian relations are strategic relations and a part of these strategic ties is flights between the two countries and the only missing link in this strategic partnership which we hope to fulfill in a very near future," he said.

Elbadri reminded that a group of Russian experts could visit Egypt in December to inspect its airport safety and to fulfill ‘the road map’ that had been agreed between Transport Minister Maxim Sokolov and Fathy. "They will give a technical green light and make it ready for the decision to resume flights between the two countries as soon as possible," he added.

One year ago, a flight by the Russian airline Kogalymavia crashed a half an hour after taking off from the Egyptian resort of Sharm el-Sheikh. All 217 passengers and seven crew members on board died in the crash.