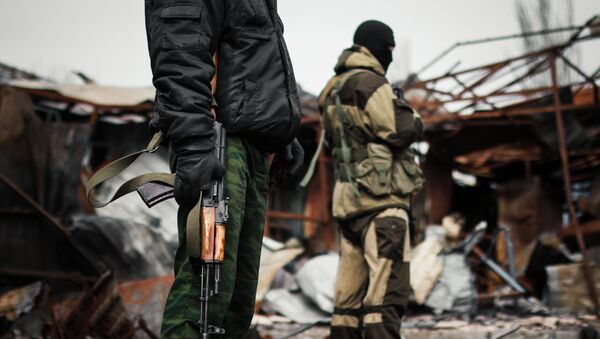 © Sputnik / Dan Levy
/
Go to the photo bank
Subscribe
Ukrainian forces accused militia in the country’s southeast (Donbass) of 54 ceasefire violations in the past 24 hours, according to the press center of Kiev’s military operation.

"In the past 24 hours… [Donbass] forces opened fire 54 times on the positions of Ukrainian defenders," the press center of Kiev’s military operation in Donbass says on its Facebook page.

Normandy Diplomats Could Meet to Discuss Ukraine Road Map in Nov-Dec
A new regime of silence came into force in Donbass on September 1. The ceasefire agreement was reached between Ukraine’s conflicting sides during a Contact Group meeting in August.

The Trilateral Contact Group, which includes representatives from Kiev, Donbass, Russia, and the Organization for Security and Cooperation in Europe (OSCE), hold regular meetings in the Belarusian capital, Minsk, aimed at facilitating a diplomatic resolution of the armed conflict in Ukraine’s southeast.