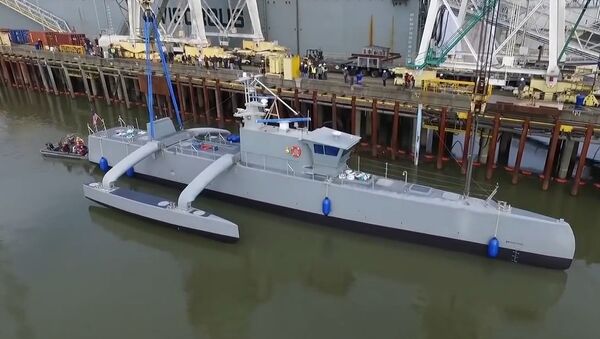 US Starts Testing New Submarine-Hunting Unmanned Ship (VIDEO)
The "Sea Hunter" reconnaissance drone is scheduled to undergo the lengthy certification in January 2017. The announcement was made on October 24 by program manager Scott Littlefield at the annual AUVSI Unmanned Systems Defense maritime day, held in Arlington, Virginia.

According to Littlefield, COLREGS is a "threshold capability that is important for any large USV that will be operated at long distances from a human operator."

"It is the rules of the road at sea," he added.

The ACTUV is a 132-ft trimaran sea drone, designed to track down submarines of all kinds, from self-made Columbian drug subs to their full-scale military counterparts. According to DARPA, the drone is primarily self-controlled, with remote control being only an additional feature. COLREGS certification will prove the vessel will be safe for other ships in its vicinity, Littlefield explained.

US Navy Developing Variety of Shallow-Water Submarine Drones - Carter
Currently, ACTUV is not armed. When a submarine is detected, the drone will pursue it, signaling coordinates to the Navy command. The drone is expected to act either as an autonomous patrol unit, or as a part of Carrier Strike Group's anti-submarine defense.

According to some US analysts, the payload of drug smuggling submarines has increased a hundredfold over past 15 years. While the crafts could only carry as much as a couple tons of cargo before, today these submarines, often made of fiberglass instead of metal, can deliver up to 100 tons.

"One such payload intercepted by ACTUV could make the program pay for itself and provide the developers with a source of inspiration for years," according to Russia's Computerra outlet.