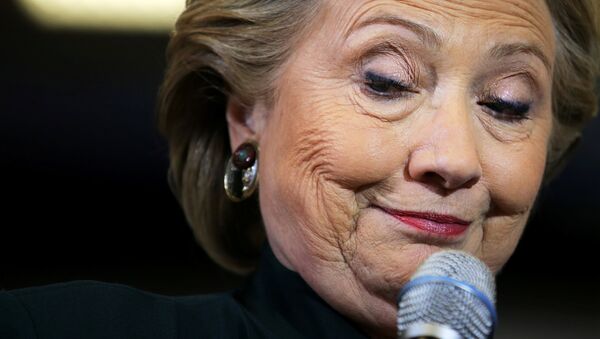 © REUTERS / Carlos Barria
Subscribe
International
India
Africa
Hillary Clinton claims that FBI hould examine emails of an aide from her time as US secretary of state and thus affirm its earlier finding that Clinton herself did nothing to warrant criminal prosecution.

WASHINGTON (Sputnik) — The Federal Bureau of Investigation should examine emails of an aide from Hillary Clinton’s time as US secretary of state and thus affirm its earlier finding that Clinton herself did nothing to warrant criminal prosecution, the Democratic presidential candidate said at a campaign rally Monday.

"Now they apparently want to look at the emails of my staffers and, by all means, they should look at them. I am sure they will reach the same conclusion they did when they looked at my emails for the last year: There is no case here," Clinton told supporters in the state of Ohio.

She addressed news that, with just over a week before the November 8 election, the FBI has reopened its investigation into her use of a private email server as US secretary of state. The focus, according to media reports, is on emails involving Huma Abedin, who was Clinton’s chief of staff at the Department of State and serves as vice chairwoman of the Democrat’s campaign.

That Ol’ Familiar Scapegoat: Top Democrat Suggests FBI Chief May Be Kremlin Spy
"I am sure a lot of you may be asking why in the world the FBI would decide to jump into an election with no evidence of any wrongdoing," Clinton remarked. "And with just days to go. That is a good question."

On Friday, FBI Director James Comey wrote a letter to members of the US Congress informing them that the bureau had found additional correspondence pertinent to its probe into the home-based, non-government server Clinton used as the United States’ top diplomat from 2009 to 2013.

In July, capping what appeared to be an end to the case, Comey announced that although Clinton’s conduct regarding the server had been careless, it didn’t to the level of criminal liability.

The timing of Comey’s new disclosure has outraged Clinton’s campaign and supporters, particularly  because voters in 36 states and Washington, DC have already begun early voting.