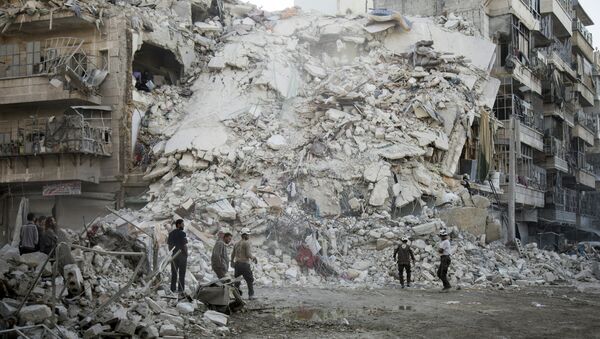 The attack has killed two Syrian servicemen and left at least 37 civilians injured, according to the Russian Ministry of Defense.

"On October 30, illegal armed groups fired shells fitted with a poisonous substance against Dahiyat Assad and Hamdaniyah areas of Aleppo city from the territory of 1070 quarters," the ministry said on its website. "Two Syrian military servicemen were killed. Not less than 37 civilians were injured."

A statement released by the Russian Foreign Ministry earlier on Monday condemned the attacks, saying "this instance of combat use of chemicals by the terrorists against the civilians is not, unfortunately, an isolated case…

"We strongly condemn the terrorist attack using toxic substances against the civilians in Aleppo."

The leadership of the Syrian Arab Army issued a statement earlier Monday saying that al-Nusra Front killed at least 84 people and injured 280 in Aleppo during the past three days, taking advantage of the ceasefire.