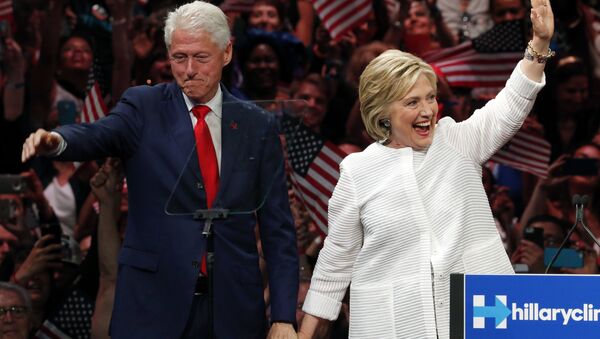 © AP Photo / Julio Cortez
Subscribe
A former FBI official called the Clintons a "crime family" and accused top officials of interference in the investigation into the private email server use by Hillary Clinton.

"The Clintons, that’s a crime family, basically … It’s like organized crime. I mean the Clinton Foundation is a cesspool," Kallstrom was quoted as saying by the Hill newspaper.

Clinton has been criticized for using the private server and email account for official business during her tenure as the United States' top diplomat.

FBI Lacks Search Warrant to Review Clinton’s Emails
On Friday, FBI Director James Comey informed the US Congress that the FBI discovered new emails sent from Clinton's private server during the course of an unrelated investigation. Comey said investigators would review the new emails to determine if they contain classified information.

Clinton has been criticized for the use of a private email server and account for official business during her 2009-2013 tenure as secretary of state. In July, Comey described Clinton’s conduct as extremely careless but said it did not warrant criminal charges.

After the initial FBI probe, Comey in September described Clinton’s use of a nongovernment email system for official business while the top US diplomat as "extremely careless," but he recommended against filing criminal charges against her.

In 2014, Clinton released more than 55,000 emails from the private server to State Department investigators, claiming the documents contained only work-related information. She has admitted to erasing 33,000 emails.