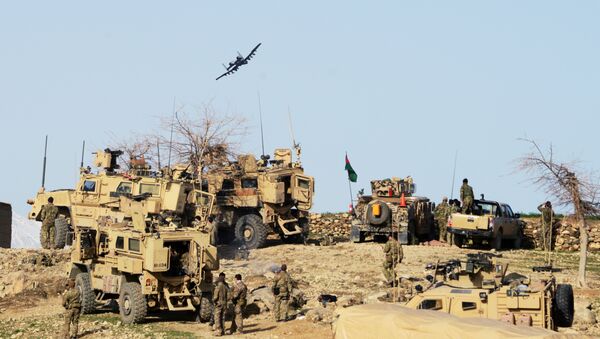 At least 19 militants from the Lashkar-e-Taiba terrorist group have been killed and eight more wounded in airstrikes on the group's operating area near the border with Pakistan, the Afghan Ministry of Interior reported October 30.

The October 29 strikes in the Dangam district of Afghanistan's eastern Kunar province also destroyed a rocket launcher and a machine gun.

The ministry's statement said a "clearance operation" in Dangam district is ongoing.

Lashkar-e-Taiba, headquartered in Pakistan, where its founder lives freely, is focused on "liberating" the northern Indian state of Jammu and Kashmir from Indian control and establishing a South Asian caliphate. It is accused of being involved in the 2010 bombing of a bakery in Pune, India, and the 2014 attack on the Indian consulate in Herat, Afghanistan.

Local media report that in 2014 the group was attempting to set up bases in eastern Afghanistan.

Afghan officials frequently complain about terrorist acts sponsored by Pakistan killing civilians within their borders. At the UN General Assembly in September, Vice President of Afghanistan Sarwar Danesh asserted that several attacks over the past year had been "planned and organized from the other side of the Durand Line, inside Pakistani territory."

"We call on the international community to pay particular attention to the elimination of terrorist safe havens located outside of the country. … We ask all of you: Where were the previous leaders of the Taliban and Al-Qaeda residing, and where were they killed? At this very moment, where are the leaders of the Taliban and Haqqani network located? From where and how are terrorists being trained, equipped and financed during a full-scale war?"