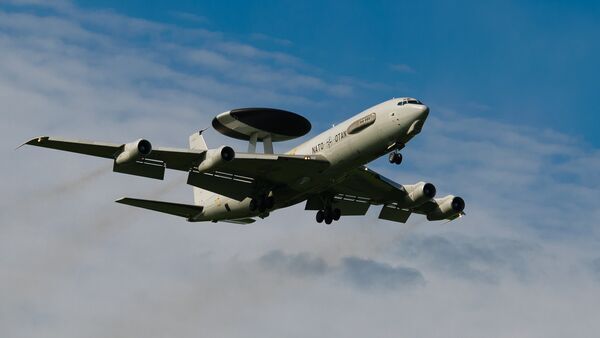 © Flickr / Archangel12
Subscribe
The Russian Defense Ministry said that the US Air Force Central Command apologized for US planes flying close to Russian jets over Syria.

US Air Force Claims Russian Jets Flew Dangerously Close to US Planes Over Syria
On October 17, a US' AWACS plane violated rules and dangerously approached a Russian Su-35 jet over Syria, the ministry's spokesman said.

"On October 17, the crew of a US aircraft E-3 AWACS drifted down nearly one kilometer from its height and dangerously approached a Russian Su-35 fighter jet at the distance of less than 500 meters in violation of all air safety rules in [Syrian] airspace near Deir ez-Zor," Maj. Gen. Igor Konashenkov said.

Shortly after the incident, the command of the Russian Aerospace Forces at the Hmeymim airbase in Syria's Latakia contacted the US side asking for explanations.

Konashenkov said that representatives of the US Air Force Command "apologized for the incident and promised to work with pilots to further avoid such situations."

US Air Force Central Command chief Lt. Gen. Jeff Harrigian claimed on Friday that a Russian military aircraft flew dangerously close to a US jet over Syria on October 17. According to Harrigian, in the latest incident the jets were less than a half-mile apart, and Russian authorities said the pilot did not see the US counterpart. The commander further claimed that Russian aircraft intercept US planes "every 10 days-ish."

Moscow is surprised by Pentagon's attempts to shift the blame for the incident on the Russian Aerospace Forces, the general said.

"We are surprised by yet another attempt of the US military command to shift the blame for the dangerous approach of the US plane to Su-35 fighter jet on the Russian Aerospace Forces."

Konashenkov said that Russian and US pilots cooperate to avoid dangerous incidents in Syrian airspace, adding that Moscow informed of the Su-35 jet's route in advance.

"This incident proved that effective cooperation has been established between Russian and American pilots allowing to avoid such incidents in future."

In October 2015, senior officials from the US Department of Defense and Russia’s Defense Ministry signed a memorandum of understanding on safety in Syrian airspace that has proven effective so far.
000000
Popular comments
How about an apology to Syria for violating their airspace and killing her citizens?

Mikhas
29 October 2016, 16:43 GMT3
000000
How about getting out of the whole area completely. You Americans have nothing lost in the Middle East. You are illegal there and up till now only are causing havoc in peoples life there and killing many, many, many unarmed human beings and child murders with your arrogant sanctions which are by the way a crime against humanity. You got problems of your own back in your exceptional country. Go home.
dewatergeus
29 October 2016, 16:53 GMT3
000000
Newsfeed
0
New firstOld first
loader
LIVE
Заголовок открываемого материала
Access to the chat has been blocked for violating the rules . You will be able to participate again through:∞. If you do not agree with the blocking, please use the feedback form
The discussion is closed. You can participate in the discussion within 24 hours after the publication of the article.
To participate in the discussion
log in or register
loader
Chats
Заголовок открываемого материала
Worldwide
InternationalEnglishEnglishMundoEspañolSpanish
Europe
DeutschlandDeutschGermanFranceFrançaisFrenchΕλλάδαΕλληνικάGreekItaliaItalianoItalianČeská republikaČeštinaCzechPolskaPolskiPolishСрбиjаСрпскиSerbianLatvijaLatviešuLatvianLietuvaLietuviųLithuanianMoldovaMoldoveneascăMoldavianБеларусьБеларускiBelarusian
Transcaucasia
ԱրմենիաՀայերենArmenianАҧсныАҧсышәалаAbkhazХуссар ИрыстонИронауОssetianსაქართველოქართულიGeorgianAzərbaycanАzərbaycancaAzerbaijani
Middle East
Sputnik عربيArabicArabicTürkiyeTürkçeTurkishSputnik ایرانPersianPersianSputnik افغانستانDariDari
Central Asia
ҚазақстанҚазақ тіліKazakhКыргызстанКыргызчаKyrgyzOʻzbekistonЎзбекчаUzbekТоҷикистонТоҷикӣTajik
East & Southeast Asia
Việt NamTiếng ViệtVietnamese日本日本語Japanese俄罗斯卫星通讯社中文（简体）Chinese (simplified)俄罗斯卫星通讯社中文（繁体）Chinese (traditional)
South America
BrasilPortuguêsPortuguese
NewsfeedBreaking
12:30 GMTIranian Commander Says US’ ‘Humiliating Escape’ From Afghanistan Lesson for Dependent Allies
12:30 GMTIndia's Top Sikh Organisation Suspects Attack on Washington Worship House is Racial
12:21 GMT‘Disappointed’ Senate Dems Blocked From Attaching Immigration Reform to Biden's Massive Budget Bill
12:16 GMTIt's a Girl: Compromised Royal, Prince Andrew, Welcomes New Grandchild
11:52 GMTElection Commission: United Russia Ahead With 49.82% in Parliamentary Vote as 99% of Ballots Counted
11:49 GMTUK Crisis: Why Are Gas Prices Surging, Leading To Massive Spike In Cost Of Energy To British Homes?
11:30 GMTPoland to Boost Defence on Border With Belarus by 500 More Troops
11:24 GMTOne Person Killed, Four Injured in Freight Trains Collision in Guinea, Reports Say - Photos
11:23 GMTIran Dismisses NYT’s Account of Mossad Assassination of Nuclear Scientist as Just ‘Newspaper Report’
11:20 GMTLabour MP Seeks Party Position Clarity Over Transgender Issues Amid Online Threats
11:16 GMTKosovo Bars Serbian-Registered Vehicles From Entering
11:15 GMTBoris Johnson to Face-Off with Amazon Founder Jeff Bezos Over E-Commerce Giant’s Low UK Tax Payments
11:04 GMTAll About Decision Making: PSG's Pochettino Explains Why He Substituted Messi During Match With Lyon
11:02 GMTIndia: 19-Party Alliance Begin Countrywide Protests Against Narendra Modi Government
10:51 GMTFormer UK Prime Minister Urges Rich Nations to Send COVID-19 Vaccines to Poor Countries
10:40 GMTAlia Bhatt's New Ad Stirs Uproar for Painting Hindu Ritual 'Kanyadaan' as 'Regressive'
10:36 GMTNorth Korea Calls AUKUS Submarine Deal 'Dangerous Act' Fueling Arms Race
10:16 GMTHotel Rwanda Hero Convicted of Terrorism Charges After Being 'Kidnapped' From Dubai
10:08 GMTBoeing Begins Probe After Empty Tequila Bottles Found Aboard Air Force One Plane Under Construction
09:59 GMTCristiano Ronaldo Reacts to Manchester United's Win Over West Ham: 'Let's Go, Devils!'