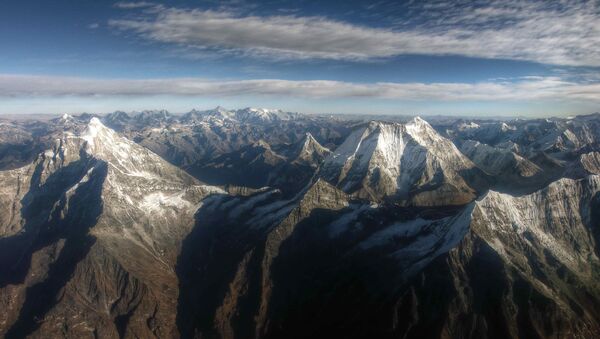 © Flickr / mariusz kluzniak
Subscribe
A team of Russian daredevils led by Novosibirsk-based traveler Alexei Kamerzanov has embarked on an ambitious project to visit faraway corners of the world that a car with Russian license plates has never been to before.

In an interview with Sputnik Poland Alexei shared his impressions of the 15,000 kilometers his team has already trekked across a dozen countries.

“The Non-Silk Road” film made during that voyage and which premiered in Moscow on Friday captures the most fascinating moments of the second leg of their trip around the world.

Russian Adventurer Sets New Round-the-World Record For Solo Balloon Trip
“My biggest joy is to see people watching [the film] and enjoying what they see. We’ve spent a lot of time and effort not only to make this trip, but also to give people a chance to share our impressions of that voyage,” Alexei Kamerzanov said.

When asked about the reason of his new trip to Asia, Alexei said that they had initially planned to cross China and then move to India via Nepal.

“We’ve never been to Nepal, but they had an earthquake there in 2015, so we had to find a way around it. Leaving our vehicles in Thailand for several months seemed the best way to go, that’s why we chose the Asian route.”

From Thailand the team crossed the border into Burma. It was the first time vehicles with Russian license plates had ever been there.

After a 10-day trek across Burma, the team crossed into India spending three weeks moving along mountain roads, spending nights on Himalayan ridges roamed by bears, before they finally reached Pakistan.

“Getting there we realized that we were bound to move down the Karakoram Highway, which is the highest paved international road in the world. As a result, we crossed the country from east to west and two months later we were already in Baku, [Azerbaijan],” Alexei said.

When answering a question about how many people there are in his team and who makes up the core group, he said that there were six or seven permanent members with new people always joining as they moved along.

“People come and go and it is fun. [The core group] consists of those with whom I have already traveled. This is like America where people of all imaginable nationalities are brought together by a common ideology. If you share these ideals then you are a true-blue citizen. The same in our expedition where people with different social and economic backgrounds are brought together by their passion for travel and their team spirit,” Alexei continued.

When asked how they repaired their vehicles, reinforced for long journeys, while on the road, he said that, first, they have a large set of time-tested spares they never part with and, second, they have a mechanic in their team who can fix things when necessary.

“When things get real rough we go online for all kinds of hints and ask our friends out there how best to deal with this or that problem. We manage!” Alexei smiled.

He said that the main discovery they had made during the trip was Asia itself.

“Asia has so many different faces! This is what I like about it the most – its unpredictability and its yet unrevealed secrets. My strongest impressions were the Takla-Makan desert, the road traffic in India, the Karakoram Highway in Pakistan and the Pakistani people too.”

When asked what he didn’t like and the places he would never wish to come back to, Alexi said that there was no place they wouldn’t go to, but he had been appalled by the poverty and dirt he has seen in India.

“It’s not so much about people beings so poor and that you have to wash your hands all the time. You get morally depressed. Once we came to Varanasi, the impression was that the whole place was one big shantytown stretching forever. I’m not saying we’ll never go to India again, but if we had to choose between going to India or China, I would prefer China.”

Speaking about his impressions of Iran, Alexei said that after India and Pakistan, Iran seemed a completely different country.

“It was like coming to a big city from some backwater province in the middle of nowhere. This is evident from the clean streets they have there, from the way people talk. It’s a highly civilized nation, which I believe will eventually become an economic power everyone will have to reckon with.”

Chinese Crew Begin First Round-the-World Flight on Single-Engine Aircraft
Alexei also mentioned the lack of religious bigotry on the part of the Iranians.

“They took us to the mosques and when we asked them if it was all right for us to go there, they said: ‘Come on, you are not in   Saudi Arabia, this is Iran!’ So the Shiite branch of Islam was rather friendly towards us, and we were pleasantly surprised by all that. Iran has been given a bad name by the media, but then again, you can turn any country into a pariah, can’t you?”

When asked about the political atmosphere in the countries they traveled to, Alexei Kamerzanov said that there was a difference between how countries treat each other on an official level and the attitude of ordinary people.

“Happily, in all the countries we traveled to people treated us very well. Frankly speaking, I had some reservations about Pakistan because during the Indo-Pakistani war the Americans helped them and we helped India. Things have changed since then though, and the very moment we told them we were Russians they were all smiles welcoming us. Everyone is welcome there, except the Americans.”

Alexei added that on an official level there were no problems either because Russia maintains good relations with everyone.

“Some problems may arise of course because politics is politics and there may be places out there you may not be allowed to go, but so far we’ve been lucky,” Alexei said in conclusion.