Russia Has 'Four Options' Once Victory in Aleppo is Secured 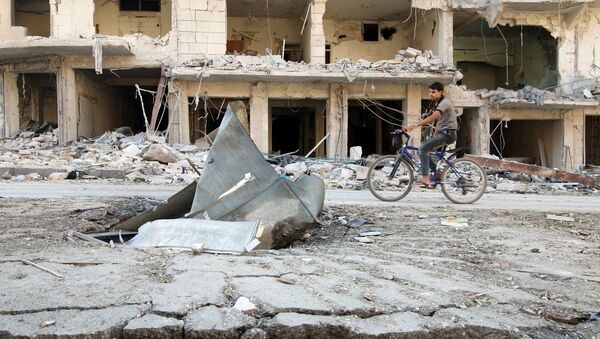 The Syrian Arab Army, assisted by Russia, Iran and local allies, needs to free rebel-held areas of Aleppo before the next US president moves into the White House on January 20, 2017, analyst Gevorg Mirzayan wrote for RIA Novosti, saying that Moscow has to secure an "impressive victory" in the key Syrian city while there is still time.

"Washington will be passive in its foreign policy during the election in the United States and the interregnum (between the election of the new president on November 8 and the inauguration on January 20). As a result, Moscow has room to strengthen its standing ahead of the looming talks on Syria with the US," he said.

Mirzayan of Moscow-based Financial University noted that Russia should at least liberate eastern Aleppo and "remove this card from the Americans' table." At best Moscow should clinch an "impressive victory" in what has become one of the key battlefields of the Syrian crisis.

Russia could reach an agreement with Turkey to resolve the Idlib issue, he observed. Armed groups, including the infamous Army of Conquest, have been active in the province of Idlib, which is expected to become one of the key focal points for the SAA in its efforts to bring peace and stability to the country.

Another option that Moscow could consider is mounting an offensive on Raqqa. Earlier this week, US Secretary of Defense Ashton Carter said that the Pentagon will launch an operation for the so-called capital of Daesh's caliphate in weeks. He did not specify whose forces are supposed to take the lead in this campaign. Earlier, Washington said that Kurdish forces will be largely responsible for carrying out the operation, something that Ankara has fiercely objected.

Russian MoD Provides Proof That Moscow Wasn't Behind Idlib School Attack
Mirzayan further said that Russia could instead focus on laying the groundwork for a new negotiations format with the United States. Moscow and Washington reached a breakthrough deal aimed at halting violence in Syria, but it fell apart seven days after the ceasefire came into force.

Finally, the analyst said that Russia could wrap up its already limited operation in Syria altogether. Moscow launched its military campaign on September 30, 2015, but removed the bulk of its forces from the embattled Arab country in March.

The analyst also warned that "if the Aleppo issue is not resolved before January 20, the US will use it as a major leverage to exert pressure on Russia." He suggested that Washington could even push for new sanctions against Moscow.