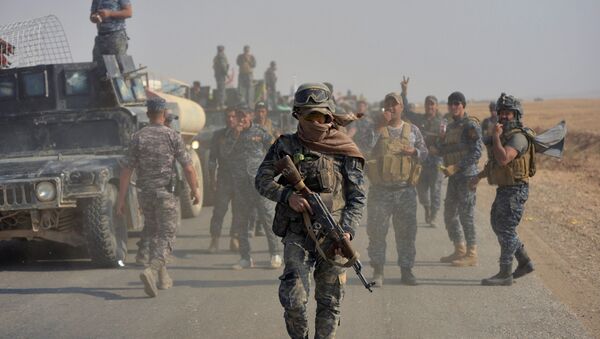 The Iraqi militias, partially trained by the Iranian military, will attempt to complete the encirclement of Mosul, blocking it from the West, a representative said.

Battle for Raqqa: What the US Wants From Its 'Urgent' Operation in Syria?
The western approach is deemed the only humanitarian corridor for civilians seeking to escape the besieged city of 1.5 million. At the same time, it remains the only route that Daesh fighters can use to flee the city on their way to Raqqa, the jihadist group’s major bastion in Syria.

Daesh has exploited civilians living to the west of Mosul, creating human shields consisting of women and children from local settlements. Some 8,000 families have been abused this way, the UN reported on Friday.

"This is the most important and dangerous line because it connects Mosul to Raqqa and is the only supply line for Daesh," Ahmed al-Asadi, a spokesperson for the Popular Mobilization Units, told Iraqi TV on Friday, stressing that use of the western avenue is essential to defeat Daesh.

Asadi added that the offensive is due to begin in "a few days or hours," adding the first target will be Tal Afar, a town 35 miles west of Mosul, currently occupied by Daesh.

"Tal Afar is the final destination… it is the pyramid’s peak,” he asserted. “But there are villages on the way that need to be liberated before reaching Tal Afar."

The participation of Shia forces in the Mosul battle has long been under scrutiny, with players including the US and Turkey strongly opposing their participation as a move to bolster Iran, the major Shia country in the world.

Rights watchdog organizations cautioned Baghdad that, upon retaking territories from Daesh, Shia militias could carry out acts of revenge on the Sunni population, increasing violence.

'They Humiliated Us, Blew up Our Church': Iraqi Priest Recalls Life Under Daesh
The battle for Mosul began October 17, with 50,000 Iraqi soldiers, and Kurdish Peshmerga forces, supported by US-led coalition airstrikes, advancing on the city from the south, north and east.

In the course of operations Iraqi forces liberated one small town and 12 villages located to the east and northeast of the city. Daesh has suffered harsh losses, as many “flee or blow themselves up in trucks rigged with explosives," according to Iraqi General Mukamed Masid.

On Friday, forces reported a halt in the offensive, some six to 12 miles from Mosul, to ensure rear areas were cleared of the jihadists. At the same time, US-led airstrikes have continued.

Mosul was seized by Daesh in 2014, and was declared one of two capitals of a self-declared caliphate, by the organization’s then-leader Abu Bakr al-Baghdadi.

000000
Popular comments
The Militia securing the Western area of Mosul hopefully has brought air defense with them, otherwise Nato will bomb them.
mzungu in Africa
29 October 2016, 08:36 GMT1
000000
Actually, I dont know why people oppose the hashd al sha3bi joining the fight! At the end they are iraqi and from iraq and they proved in the field to be a reckoning force that can match the brutality of the scumbags that are so called Da3esh. The only people who oppose their fight is the wahabis who apparently like to see Iraq divided and weak. But I say to them all that iraq will be liberated and they can give asylum in their lands to their beloved Da3esh dogs! Victory is on the way and before you judge me and say he's probably a shia supporter, i am actually a sunni iraqi!
Iraqi Sam
29 October 2016, 13:40 GMT
000000
Newsfeed
0
New firstOld first
loader
LIVE
Заголовок открываемого материала
Access to the chat has been blocked for violating the rules . You will be able to participate again through:∞. If you do not agree with the blocking, please use the feedback form
The discussion is closed. You can participate in the discussion within 24 hours after the publication of the article.
To participate in the discussion
log in or register
loader
Chats
Заголовок открываемого материала
Worldwide
InternationalEnglishEnglishMundoEspañolSpanish
Europe
DeutschlandDeutschGermanFranceFrançaisFrenchΕλλάδαΕλληνικάGreekItaliaItalianoItalianČeská republikaČeštinaCzechPolskaPolskiPolishСрбиjаСрпскиSerbianLatvijaLatviešuLatvianLietuvaLietuviųLithuanianMoldovaMoldoveneascăMoldavianБеларусьБеларускiBelarusian
Transcaucasia
ԱրմենիաՀայերենArmenianАҧсныАҧсышәалаAbkhazХуссар ИрыстонИронауОssetianსაქართველოქართულიGeorgianAzərbaycanАzərbaycancaAzerbaijani
Middle East
Sputnik عربيArabicArabicTürkiyeTürkçeTurkishSputnik ایرانPersianPersianSputnik افغانستانDariDari
Central Asia
ҚазақстанҚазақ тіліKazakhКыргызстанКыргызчаKyrgyzOʻzbekistonЎзбекчаUzbekТоҷикистонТоҷикӣTajik
East & Southeast Asia
Việt NamTiếng ViệtVietnamese日本日本語Japanese俄罗斯卫星通讯社中文（简体）Chinese (simplified)俄罗斯卫星通讯社中文（繁体）Chinese (traditional)
South America
BrasilPortuguêsPortuguese
NewsfeedBreaking
01:09 GMTCanada's Trudeau Reveals Two Detained Canadians Have Been Released After Wanzhou Departure
01:06 GMTPacific Pacts Galore: Quad Leaders Hold First In-Person Summit a Week After AUKUS Inaugurated
00:34 GMTBiden Dropped F-Bomb After Discovering Trump’s ‘Golf Toys’ at White House, Book Reveals
YesterdayUS Navy, Air Force Order 16 More F-35 Jets Costing Over $1Bln - Pentagon
YesterdayPentagon Chief to Check US Bases Involved in Afghan Evacuees Processing - Spokesperson
YesterdayGerman Television Station Gives National Election Results Two Days Before the Election
YesterdayEU Ministers Unveil Plan to Weaken Russian Grip on Gas Supply
YesterdayFrench Soldier Killed in Clashes With Terrorists in Mali - Reports
YesterdayUS Stocks Eke Out Steady Finish to Volatile Week After Federal Reserve Stimulus Taper Plan
YesterdayEx-Nazi Oberlander’s Evasion of Justice an Indictment of Canada’s Legal System - Activist
YesterdaySuspected Gunman Identified in Deadly Kroger Shooting as FBI, Tennessee Police Search for Motive
YesterdayN. Cyprus to Convey at UN Talks Its Desire for Sovereign Equality - President
YesterdayUS Still Going After Terrorists Responsible for Kabul Airport Attack - Pentagon
YesterdayPentagon on Milley Proposal: US-Russia Military Contacts Limited to Syria Deconfliction
YesterdayPrince Andrew Acknowledges Serving of Sex Assault Accuser's Lawsuit in US
YesterdayCanadian Judge Signs Discharge Order Releasing Meng Wanzhou From Custody
YesterdayPuigdemont to Return to Sardinia for Court Hearing on October 4 - Attorney
YesterdayVIDEO: Huge Shockwave Explodes From La Palma Volcano
YesterdayBiden Will Not Invoke Executive Privilege Rule Regarding Trump Activities - White House
Yesterday'Horrendous!': MTG, Democrats Get in Shouting Match on Capitol Steps After Abortion Vote