Lavrov, Zarif and Muallem Give Joint Press Conference After Meeting in Moscow 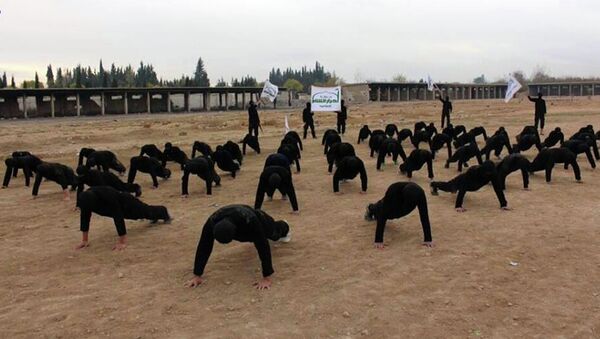 Russian Foreign Minister Sergei Lavrov, his Iranian and Syrian counterparts, Javad Zarif and Walid Muallem have commented on the situation in Syria during a joint press conference in Moscow.

Russian Foreign Minister on the Situation in Syria

Lavrov said that Moscow and Tehran support Syria's sovereignty, the fight against terrorism and the restoration of the country's economy. Moscow, Tehran and Damascus agree that the Syrian peaceful settlement has no alternatives.

He said that neither Russian, nor Syrian warplanes have been conducting operations in Syria's Aleppo for ten days.

Lavrov said that Russia hoped that the humanitarian pause in Aleppo would be used by the United States to separate terrorists from Syrian rebels.

"We hoped that humanitarian pauses and the stop of airstrikes will be used by our American partners to convince the so-called moderate opposition to separate from al-Nusra Front and Jabhat Fatah ash-Sham, which are in fact those who lead all groups of armed opposition in eastern Aleppo. Unfortunately, such a separation has not happened again. Moreover terrorists have closed the exit from the city via humanitarian corridors for civilians."

Moscow does not expect that the US will implement its obligation and finally separate terrorists and Syrian rebels, he added.

"I think that given an absolute lack of evidence showing that the 'moderate' opposition in eastern Aleppo aims to separate from al-Nusra Front [terrorist group], time has come to implement the logic stated by John Kerry in practice."

Russia Registered US Attack Drone in Area Where Idlib School Was Attacked - MoD
The foreign minister commented on the attack on a school in Syria's Idlib, claiming over 20 lives. He said that Western data, accusing Moscow and Damascus of striking the school is fabricated.

"The Russian Defense Ministry published facts, which refute these accusations and show that the information is fabricated," Lavrov said.

On Thursday, the Russian Defense Ministry said that no Russian aircraft have been in the area, adding that a US Predator drone has been registered in the area where the school had been attacked. The ministry added that video footage published in media showing the alleged strike on the Idlib school have been fabricated.

"Video footage published by a number of foreign media outlets of an alleged strike on the residential area of Hass [in Idlib] consists of more than 10 pieces pasted together, being shot at different times of the day," the ministry's spokesman Maj. Gen. Igor Konashenkov said.

On Thursday, the executive director of the United Nations Children's Fund (UNICEF) Anthony Lake said that as many as 22 children and six teachers were killed in an attack on a school in Idlib.

Lavrov urged the UN "not to listen to the hysterical campaign of lies regarding what is currently happening in Aleppo in the humanitarian sphere."

"We could not ignore, to say the least, not professional enough work of UN humanitarian missions. Their inaction allowed the so-called local council in eastern Aleppo to disrupt the medical evacuation, on which they themselves insisted. We are disappointed that UN humanitarian missions representatives’ statements to the public looked like attempts to create a cover for politicized, unworthy ideas."

The Russian minister said that "the humanitarian tragedy of the Syrian people are being used by outside players for PR and achievement of own goal, including their financial interests."

Lavrov said that some "foreign players" use the Syrian conflict to achieve own goals. He emphasized that any aid to terrorists is prohibited and Moscow will insist on this rule in the United Nations, including during contacts with the United States.

"Prevention of terrorism financing is not somebody's whim, it is a request of the UNSC. This is stated in resolutions. Any financing, including from abroad, is prohibited by the UN Security Council. And we will insist on the implementation of these requirements, including during our contacts with the US-led coalition member states."

What's the Rush: Pentagon Waging 'Strange War' in Mosul and Raqqa
The foreign minister commented on the operation to retake Mosul from Daesh, saying that both Russia and Iraq are interested to take measures to stop militants from fleeing to Syria from the Iraqi city.

"We are interested to take measures together with Iraqi colleagues to prevent exodus of terrorists with weapons and vehicles from Mosul to Syria, which will of course lead to the escalation of the situation in Syria. We think it is important to prevent that, we will discuss this issue with the United States and other members of their coalition."

He added that Moscow sees no difference between the situations in Syria's Aleppo and Iraq's Mosul.  He said that amid the Mosul operation, the work of the Baghdad Information Center created by Russia, Syria, iran and Iraq has become more cricial.

Syrian Foreign Minister Walid Muallem said that Damascus will continue the fight against terrorism and vowed that Aleppo will be liberated.

"We will not reduce our efforts in the fight against terrorism, liberate Aleppo from terrorists and restore the unity of the city. The humanitarian situation, of course, should be taken into account. During the truce in Aleppo, it became crystal clear who truly violated the ceasefire and with what intentions, as well as who prevents the evacuation of civilians and wounded."

Al-Nusra Front, Syrian Rebels Not Letting Red Cross Evacuate Wounded From Aleppo
Muallem said that the US is not willing to separate terrorists and Syrian rebels.

He added that there are no contacts between legitimate Syrian authorities and the US-led coalition that has been conducting airstrikes in Syria without the approval from Damascus, thus, violating international law.

Muallem also said that Damascus does not believe in the possibility of the liberatation of Raqqa from Daesh by the US-led coalition during two weeks.

"When someone says that they can liberate Raqqa in a few weeks, no one believes in it. The coalition is operating for over two years now, but we are always asking a question, what are their results in the fight against Daesh, this is why all these talks may be helpful for the US administration in the election campaign, but we do not believe them."

Syrian President Bashar Assad expresses his gratitude to the Russian government and people for the efficient assistance in the fight against terrorism, Muallem said.

"President of Syria Bashar Assad asked me to express his gratitude, gratitude of the Syrian government and people to the President Putin and to the friendly Russian people for their efficient assistance in the fight against terrorism."