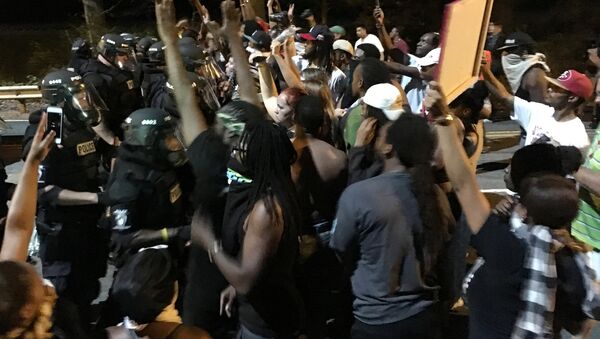 Seven residents of Charlotte, North Carolina, are claiming in court that police executed a “military grade assault” to disrupt a peaceful demonstration protesting the shooting death of Keith Lamont Scott at the hands of Charlotte police.

The plaintiffs, represented by C. Scott Holmes of the North Carolina Central University Civil Litigation Clinic; David Hall of the Southern Coalition for Social Justice, and Jacob Sussman of Tin Fulton Walker & Owen PLLC in Charlotte, are part of an organization called Charlotte Uprising, and filed their complaint on October 21 in Charlotte Federal Court.

Scott was killed on September 20. His wife claims that Scott was reading a book and waiting for his son’s school bus to arrive when he was confronted by police. Authorities say that Scott had a gun and refused to follow law enforcement orders. The ensuing days of protests led North Carolina Governor Pat McCroy to place the city of Charlotte under curfew, and call in the National Guard.

The complaint reads "CCMPD, acting under color of law, has intimidated demonstrators, impeded their entry or exit from demonstrations, assaulted them with chemical agents (including tear gas and pepper spray), shot them with so-called "less than lethal" projectiles, rounded them up in mass arrests, engaged in physical and verbal abuse, failed to visibly identify themselves, and categorically labeled all demonstrations as unlawful assemblies," according to Courthouse News.

Plaintiffs claim that the Charlotte-Mecklenburg Police Department violently disrupted demonstrations despite the presence of children and the elderly, and that in some instances protesters were trapped and unable to escape the tear gas that was launched at them.

The complaintants are also seeking injunctive relief and a restraining order, along with a court order stating that authorities cannot be deployed to protests, rallies or other public gatherings without visible identification; cannot disperse protests without clear instruction and cannot use pepper spray, tear gas or other similar implements to disperse a crowd.

Hall told WSOC, "The Charlotte-Mecklenburg police have repeatedly resorted to unnecessary and unreasonable uses of force against nonviolent protesters…"Using violence and intimidation against people peacefully exercising their constitutional rights is unacceptable and must stop."

Charlotte Uprising member Loan Tran said, "Everyone deserves to have their constitutional rights protected by the police, not violated by them," adding, "The way the police have responded to past protests with violence leads us to believe they will do the same for future protests. The courts should grant this restraining order to make sure everyone who wants to exercise their constitutional rights (is) allowed to do so without intimidation from the police."