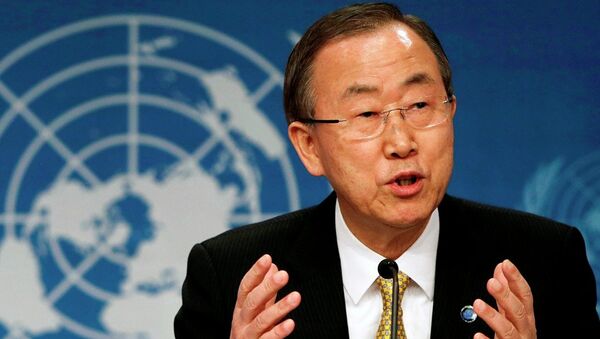 The attack on a school compound in Syria’s Idlib governorate that killed 22 children and six teachers may amount to a war crime, UN Secretary-General Ban Ki-moon said in a statement on Thursday.

Attack on School in Syria's Idlib Kills 22 Children, Six Teachers - UNICEF
UNITED NATIONS (Sputnik) — Earlier in the day, the executive director of the United Nations Children's Fund (UNICEF) Anthony Lake said that as many as 22 children and six teachers were killed in an attack on a school in Idlib.

“The Secretary-General is appalled by reports of attacks that killed students and teachers in a school complex in Haas village, Idlib governorate, Syria on 26 October. If deliberate, this attack may amount to a war crime,” the statement said.

Earlier in the day, Russian Foreign Ministry spokeswoman Maria Zakharova condemned the attack on a school in Syria's Idlib and called for an investigation into the bombing. She also said that international media "launched an attack" on Russia by claiming that Moscow and Damascus are behind the bombing without presenting evidence.