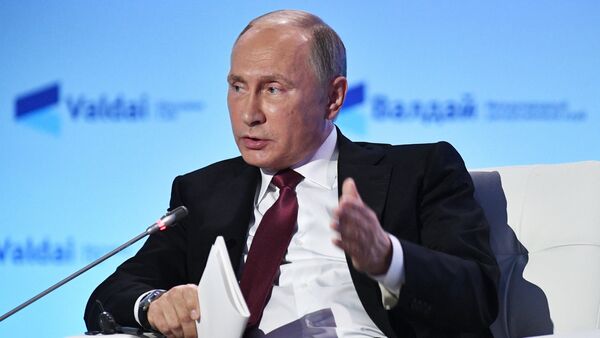 Russian President Vladimir Putin discussed the US-Russia ties, the situation in Syria and Russia's role on the global arena during the 13th annual Valdai Discussion Club session in Sochi.

Putin: Attempts to Create Nontransparent Projects Like TTIP, TPP 'Regrettable'
Putin said that global contradictions associated with the redistribution of economic power are on the rise.

"What recently was considered to be the truth and dogma has often been flipped inside out," he said.

The US refused to hold an equal dialogue with other countries, Putin said. He added that global political and economic rules are constantly being changed.

"While being in obvious euphoria [from its perceived Cold War victory], they [the US authorities] essentially abandoned meaningful, equal dialogue with other participants in the international life. They prefered not to create or improve universal institutions and attempted to extend the action of its own structures, rules and regulations on the whole world. They have chosen the path of globalization and security for itself, for few, but for not all," Putin said at the Valdai Discussion Club.

Sanctions are being used for political pressure, while closed trade alliances are being created bypassing the World Trade Organization (WTO), the Russian leader said.

"We see how free trade is sacrificed and so-called sanctions are being used for political pressure. Bypassing the World Trade Organization, they are trying to form closed economic alliances with rigid rules and barriers, where the main beneficiaries are their own transnational corporations," Putin said.

"We also know why this is happening: if we cannot solve the accumulated issues within the framework of the WTO, then we will move these rules and the organization itself to the side and create a new one."

"The contradictions associated with the redistribution of economic power and political influence continue to grow. Mutual distrust narrows our ability to respond effectively to the real challenges and threats the international community faces. In fact, the globalization project itself is in crisis, and in Europe, as we know, some people speak about failure of multiculturalism," Putin said.

Putin added that the rules of the world economy and in the international politics are constantly changing.

"The system of international relations is constantly in a fever, the global economy cannot get out of the systemic crisis. The principles and rules in politics and the economy are being constantly reshuffled," Putin pointed out adding that some major international players try to change the rules of the game according to their short-term interests.

He said that the creation of the 'Russian threat' myth is profitable for defense contractors.

"Fictional, mythical threats, like the notorious Russian military threat, are constantly being used. Indeed, it is a profitable activity: you can squeeze out defense budgets in your countries, recruit allies in the interests of one superpower," Putin said.

He added that NATO declined Russia's offer to conduct military flights over the Baltic region with switched-on transponders.

"Firstly, NATO's flights far outnumber ours. Secondly, I promised to the president of Finland to raise this issue with our partners at the next meeting of NATO-Russia Council. Our NATO partners rejected the proposal," Putin said.

Russia-US Ties and US Elections

Lavrov: US Falls Under 'Artificial Impression' of Russian Meddling in Elections
Putin also commented on the claims of Russia's alleged intervention in the US presidential election, calling them a "hysteria."

"Among the mythical, invented problems and concerns is hysteria — I cannot call it otherwise — unfolding in the US concerning the current presidential election," Putin said, referring to allegations of cyberattacks targeting party and political infrastructure.

He added that the candidates should concentrate on the important interior issues during the elections instead of inventing stories of the Russian threat. "It is much easier to distract people with the Russian so-called hackers, spies, agents of influence."

"Does anyone seriously think that Russia can somehow influence the choice of the American people? Is America a banana republic or what? America is a great power."

Russia will work with any elected US president, Putin said. Moscow cannot but welcome statements on an intention to normalize US-Russia ties, Putin added.

"We don't care much about this [who wins the US election], but we cannot but welcome words, thoughts and intentions about the normalization of relations between the United States and Russia," Putin said.

Media claims of US presidential nominee Donald Trump being Moscow's "favorite" in the race are not coincidental and used to manipulate public opinion, Putin said.

"As for the so-called [Kremlin's] favorites in the US presidential campaign. This impression is created by media. And it's not a coincidence," Putin said, adding that these claims are aimed to benefit Hillary Clinton.

Trump May Partially Revoke Anti-Russia Sanctions If Elected US President
Despite extravagant behavoir, Trump represents the interests of ordinary people and parts of the American society who are tired of elites being in power, Putin said.

"He [Trump] certainly behaves extravagantly, but he represents the interests of ordinary people, he presents himself as an ordinary person criticizing those who have held power for decades."

Russia and the United States will continue working on a variety of issues despite the suspension of the Russian-US agreement on the disposal of weapons-grade plutonium, Putin said. "We halted that deal [on the disposal of plutonium], because the United States is not fulfilling all of their obligations, but we will still be able to reach agreement on how to negotiate on a wide range of problems."

Situation in Syria and Russia-US Deal

Putin said that the Russia-US deal on Syria did not work as Washington continues to shoot itself in the foot.

"Our personal agreements with the US president [Barack Obama] have not worked. There were forces in Washington that did everything possible to fail to implement these agreements. This shows an inexplicable, I would say, an irrational desire of Western countries to repeat their mistakes over and over again, shooting themselves in the foot," Putin said.

Putin said that US President Barack Obama promised to separate terrorists and Syrian rebels during seven days after the start of the ceasefire regime in Aleppo.

US 'Has no Better Option Than to Keep Trying to Work With Russia' in Syria
He said that Moscow is ready to work with any elected US president on the settlement of the Syrian crisis.

He emphasized that those who use terrorists in own interests always lose. "Terrorist groups continue to be armed, equipped, trained in an attempt to use them as before to achieve their political goals. This is a very dangerous game, and I would like to appeal once again to these players: extremists are smarter, wiser and stronger than you. You will always lose when 'flirting' with them."

Russia is still calling on all interested parties to join forces in the anti-terrorist fight, Putin said.

A united front against terrorism has not been created, the president said.

"It is important to work together, to actually fight against terrorism and extremism. It has been repeatedly noted that this evil can be defeated only by uniting the efforts of all countries in the world. Russia offered it and still offers it to all of the interested partners."

"People are frightened that terrorism has become a routine. Moreover, the recent terrorist attacks — in Boston and other US cities, in Paris, Brussels, Nice, in German cities, unfortunately, in our country — show that terrorists no longer need a cell or organizational structures, they can act alone, independently, it is enough to ideologically motivate [executors] and direct them against 'the enemy'," the president said.

He said that current level of international terrorism proved the inability to face threats, which is proved by the situation in Syria.

The spread of terrorism around the world demonstrated inability of some world leaders to properly assess modern threats, Putin said.

"The spread of terrorism highlighted inability to assess the nature, causes and the rise of threats. We can see this from the way the situation is developing in Syria, where attempts to stop the bloodshed and start a political process are failing. After long negotiations, huge efforts, difficult compromises a united front against terrorism began to appear, but it did not happen, it, in fact, has not been created."

"… The war in Syria began long before we got involved, and the terrorists appeared there at once. They were given weapons,… educated, pitted against [Syrian President Bashar] Assad, and so on," Putin said.

Putin urged to mourn and remember those dead not only in Syria's Aleppo, but also in Iraq's Mosul. The Russian president added that the tragic deaths in Yemen and Afghanistan deserved mourning and remembrance as well.

Putin slammed attempts to accuse Russia over the situation in Syria's Aleppo, adding that Moscow has shown restraint and does not respond to such accusations, however, "our patience in the situation concerning Aleppo has its limits and Russia may respond."

Putin said that Russia is not seeking global dominance and expansion, as well as confrontation with any country.

"There are a few countries that have a thousand-year-old history in the world. We have learned to be proud of our identity, freedom and independence. Meanwhile, we [Russia] are not seeking neither global dominance and expansion, nor controntation with anybody," Putin said.

Rift Appears Within NATO Over the Bloc's Provocative Policy Toward Russia
Russia does not invent mythical threats, while conducting its foreign policy, but sees the real problems.

"Real leadership is not about inventing mythical threats, but about seeing real problems and helping to unite efforts of states to solve them. This is how Russia understands its role in international affairs," Putin said.

Russia sees no willingness on the part of its partners to seriously approach the task of resolving international issues, he said.