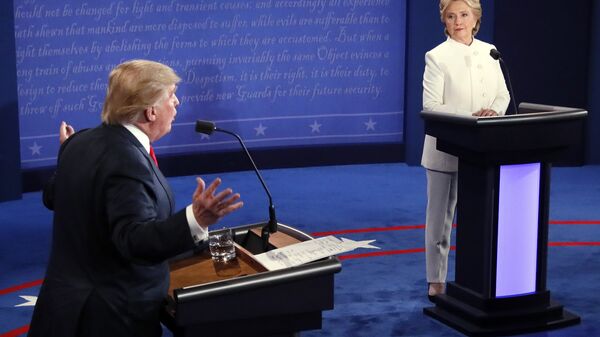 The US presidential election is unlikely to turn up the pressure on the Russian economy after more than two years of sanctions, experts told RIA Novosti.

Sanctions Damage Russian Economy but Don't Work as Political Tool - Ex-Minister
WASHINGTON (Sputnik) — US voters will go to polling stations on November 8 to elect a successor to President Barack Obama, who authorized US economic sanctions against Russia after a row over Ukraine in summer 2016.

Russia has been routinely dragged into election debates between two key candidates – Republican nominee Donald Trump and Democratic nominee Hillary Clinton, who criticized her Republican rival for wanting to "get along" with Moscow.

It has taken Russia until now to learn how to live with crippling US restrictions on its three main economic sectors – defense, energy and banking – and get back on track toward growth.

There is a chance, however, that Clinton and Trump only appear to be extreme opposites on Russia for the sake of political campaigning.

"They both come across as Hollywood actors, and matters could turn out to be not so polarized as they appear to be after the [presidential] inauguration," Vladimir Rozhankovsky, Nord Capital's former head of research and Russia’s leading international economy expert, said.

WikiLeaks dumped thousands of emails from Clinton campaign chair’s account that showed how advisers criticized her for not taking a harsh enough stance on Russian President Vladimir Putin.

Clinton’s long-time adviser Madeleine Grunwald wrote in January 2016 on Hillary’s paid speeches to Goldman Sachs they contained "a ton of foreign policy stuff, including some naive sounding comments about Putin – that could cause a whole separate set of issues."

There is no way Clinton will lift sanctions if she is elected president. Advisers of the Democratic nominee are reportedly already considering piling new sanctions on Russia if she wins the White House.

Russian Economy Improvement Not to Seriously Impact EU Investment – BP
"A Clinton victory would most likely be greeted with a relief rally in global markets and a continuation of the Obama administration's policies including the frosty nature of relations with Russia," Smith’s Research & Gradings senior economist Scott MacDonald said.

Meanwhile, a gap has opened up between US businesses and the Department of State, who keeps repeating US companies cannot do "business as usual" with Russia.

"Despite the US market’s intricate judicial and bureaucratic procedures and sanctions pressure, Russian businesses are faring fairly well in the United States," Russia’s trade envoy to the country, Alexander Stadnik, said.

The United States remains one of Russia’s top 10 export destinations and is the third biggest importer, Stadnik noted. "We are talking about a wide range, from household goods to hi-tech innovative equipment to machinery."

He estimated that last year Russia exported 25 percent more goods to the United States than in the previous year and looked set for a 10-percent increase by the end of 2016. Raw materials constitute less than 5 percent of those volumes.

There are 4,000 to 5,000 US investors present in the Russian market, from small firms to US-based multinationals, such as Intel, IBM, Microsoft, Ford, Coca-Cola, 3М, Cargill, International Paper, and Pfizer.

In turn, Russian companies are putting money into US metallurgy, chemicals and machinery, hi-tech, IT, medicine and pharma, energy, trade and food industry, the Russian trade envoy specified.

An unforeseen result of US economic sanctions on Russia has been state incentives for Russian farmers, the country’s trade envoy to the United States said.

"Agriculture has found itself in a favorable climate, seeing double-digit growth rates every year. This year, Russia became the world’s top grain exporter after it surpassed the US and Canada for the first time in years," Stadnik explained.

Financial restrictions have discouraged Russian companies from going to the United States to borrow "easy money," he added. "To maintain stability and generate cash flows, companies are now forced to review their business strategies and come up with new ones."

Russia has been involved in the making of new financial mechanisms as an alternative to the West’s legacy institutions to avoid US and EU financial sanctions, the envoy went on to say.

These include the New Development Bank (NDB) with Brazil, India, China and South Africa, as well as the Asian Infrastructure Investment Bank (AIIB), a Chinese global banking initiative that has Russia as a founding member.

World
Fidelity, Italian Style: Rome Must Pick Between NATO Loyalty and Russian Economy
Analysts predict that the US Federal Reserve will bump up its interest rates from the current target range of 0.25-0.5 percent early next year. Key rates were kept low to boost the economy after the 2008 global financial crisis.

"The outlook is as follows: they will raise the rates which will drive the US dollar upwards, which will put pressure on the trade in raw materials. This will weigh on commodity currencies, including ruble, and trigger a partial capital flight into developed economies," Stadnik predicted.

Stadnik said this would hike prices for US-made goods and further reduce US exports. As a result, the United States will lose more jobs to outsourcing.

Vladimir Rozhankovsky predicted that the fallout effect from higher Fed rates on ruble would be limited to the time of their announcement and would not extend past March 2017.

"If Hillary Clinton wins the presidential race, stock market indexes and the US dollars might appreciate, but they will go down in the medium term, considering a lack of clear-cut reforms or a more austere financial credit policy," the analyst said.

US sanctions have limited impact on Russia because it has begun diversifying away from the West by engaging economically in the East, Russia’s First Deputy Prime Minister Dmitry Shuvalov said at an economic forum in St. Petersburg in 2015.

"We must aim for places of economic growth," Stadnik stressed. "Although it has slowed down, Russia still has some potential. We are the sixth largest economy [by purchasing power parity], and one of the most attractive markets in terms of investment and trade."

The same goes for Russia’s partners from the BRICS club of emerging economies – Brazil, India, China and South Africa, he added. This will make impossible any US attempt at isolating Russia economically.

Ian Bremmer, the president of Eurasia Group consulting firm, published a report earlier this year claiming that the global economic model was going through seismic changes that would reduce the US leverage on the global economy in the future.