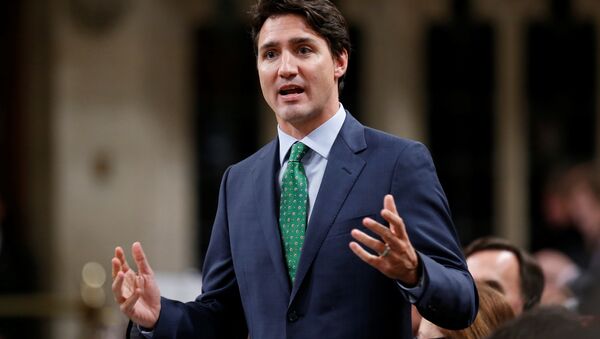 CETA Unlikely to Be Signed Within Week as Belgian Regional Gov'ts Reject Deal
The CETA deal had been slated to be signed Thursday (October 27) in Brussels, marking the culmination of eight years' negotiation to deliver an open trade area between Canada and the 28 members of the European Union. However, it floundered at the last minute because Belgium was not able to ratify the deal, because one of its regional parliaments — Wallonia — objected.

Although agreement was reached Thursday morning (October 27) when a compromise was found, it was too late to go ahead with the signing ceremony. In any case, the Belgian compromise has yet to be agreed with the other 27 member states.

Good news! We saved #CETA. Europe shld learn from this: take the citizens' concerns on board & get rid of the unanimity rule paralyzing #EU pic.twitter.com/KAegSGmvec

As late as Wednesday evening, Sputnik was told by officials in Brussels that the planned signing ceremony was still in the air, with no news on whether it was on or off. However, late Wednesday, it emerged that Belgium was still not in a position to sign the agreement and Trudeau's staff called off the visit. His itinerary for October 27 changed to "private meetings."

"The Canadian delegation will not be traveling to Europe tonight. Canada remains ready to sign this important agreement when Europe is ready," Trudeau's office said in a statement.

The CETA deal is intended to remove customs duties, end restrictions on access to public contracts and open-up the services markets between Canada and the 28 EU member states and Thursday's last-minute agreement with Belgium opens the way for the deal to go ahead, if later than expected.

Belgian agreement on #CETA. All parliaments are now able to approve by tomorrow at midnight. Important step for EU and Canada

I am glad for good news from PM @CharlesMichel. Only once all procedures are finalised for EU signing CETA, will I contact PM @JustinTrudeau

Credibility on the Line

The last-minute compromise and the political wrangling over CETA has brought to a head the arguments over EU trade deals — including the Transatlantic Trade and Investment Partnership (TTIP) between the EU and the US and the Trade in Services Agreement (TiSA) between 23 members of the World Trade Organization and the EU.

All three trade deals are facing growing opposition — not least because of the controversial Investor Sate Dispute Settlement (ISDS) provisions which they all contain, in some shape or form. For a trade deal to work, there have to be common standards on labor, environmental issues, food safety and many other issues.

​Once an agreement is in place, if a company is able to sell its products in its home territory, but is prevented from selling it in a partner country — because of conflicting regulatory conditions — then the company may invoke the ISDS provisions.

Critics say the "independent investment court system" under ISDS is separate from member states' own judicial systems and effectively creates a court system outside of state legislature and gives powerful companies more power over elected governments.

With CETA running late, TTIP and TiSA facing growing opposition and the shock of Britain's decision to leave the EU — which has enormous consequences for countries wanting to deal with the EU, including the UK — the credibility of Brussels and its ability to broker trade deal is looking shaky, once again.