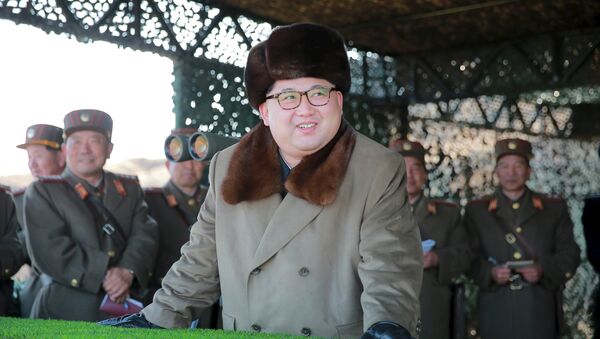 © REUTERS / KCNA
Subscribe
The unit was rotated into South Korea on Thursday, officially beginning a nine-month deployment as part of a move to maintain a US presence abroad during lean economic times for American forces.

Since the end of the Korean War in the early 1950s, the US has maintained some 258,000 troops in the South, and the new rotation system, of which this is the third installment, was implemented to keep American servicemembers at foreign bases despite budget cuts. Military leadership favors this tactic as it allows soldiers to be trained and deployed simultaneously, increasing readiness in the event of an attack from the DPRK. This kind of readiness would not be possible, top brass claims, if there was constant turnover.

2nd Infantry Division commander Major General Theodore Martin said he was “very concerned” about North Korea’s ongoing weapons activity, with 20 ballistic missile tests this year and two underground nuclear explosions, the most recent in early September. Martin asserts that this highlights the need for troops to be well-trained when they arrive.

North Korean leader Kim Jong Un has contiuously defied UN sanctions and calls for denuclearization, and has threatened any nations that show their willingness to combat him. In September the US flew two B-1 bombers over the Korean peninsula, in response to the DPRK’s continuing detonations of nuclear bombs. Washington bomber aircraft were escorted first by Japan Air Self Defense force aircraft, then by South Korean fighter jets.

Admiral Harry Harris, head of US Pacific Command, said at the time, "These flights demonstrate the solidarity between South Korea, the United States, and Japan to defend against North Korea's provocative and destabilizing actions."

Pyongyang’s Korean Central News Agency scoffed at the flyover in a statement saying, "They are bluffing that B-1Bs are enough for fighting an all-out nuclear war."

Maj. Gen. Marin told Stars and Stripes, "[Kim’s] ability to accurately deliver weapons of mass destruction on my battlefield means my soldiers need to be better trained. They need to be quicker… I thought we were good, but the enemy, our potential adversaries, are upping their game, so I’m not only going to match them, I’m going to exceed them with my capabilities."