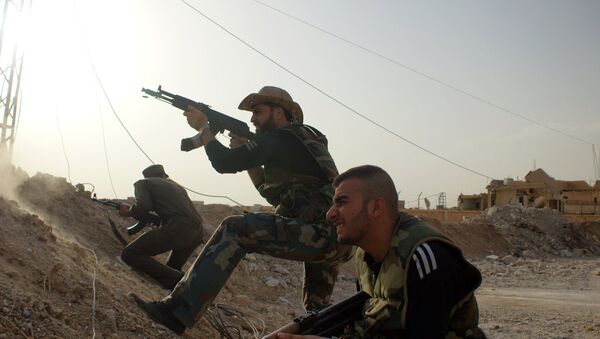 © Sputnik
/
Go to the mediabank
Subscribe
International
India
Africa
The US is training Syrian opposition for the operation to retake Raqqa from Daesh terrorists.

WASHINGTON(Sputnik) — US forces are on the ground in Syria, equipping, advising, and training Syrian Democratic Forces (SDF) and partners for the operation to isolate and then retake the Daesh stronghold of Raqqa, Coalition Commander Lt. Gen. Stephen Townsend said at a briefing Wednesday.

“I will not talk about locations where our US forces are in Syria but they are there," Townsend stated. "They equip and train at various locations, and we have advise and assist teams that will accompany partner forces anywhere they fight Daesh."

US Soldier Uses Kalashnikov to Show Yezidis How to Repel Daesh (EXCLUSIVE VIDEO)
On Tuesday, US Secretary of Defense Ashton Carter said that "capable, motivated" local Syrian forces would lead the offensive on the city.

Raqqa operation is expected to overlap with the offensive to retake Iraq's Mosul, according to the Defense Department.

Daesh, which is outlawed in Russia and other countries, seized Mosul in 2014 and Raqqa in 2013 along with a number of other cities and towns in the two countries.