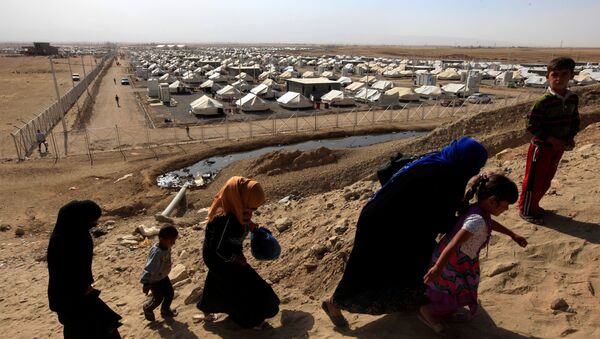 The UN Refugee Agency (UNHCR)'s goal is to secure 50,000 tents and 50,000 emergency shelter kits for Iraqi families to provide necessary assistance to the Iraqis displaced due to Mosul operation, according to a press release.

US Coalition's Victory in Mosul 'to Come at High Humanitarian Cost'
MOSCOW (Sputnik) — The UN Refugee Agency (UNHCR) has begun airlifting more than 7,000 tents to Iraq’s Erbil to provide necessary assistance to the Iraqis displaced due to Mosul operation, a press release issued by the agency on Wednesday revealed.

"The flights, carrying family tents from UNHCR’s emergency warehouse in Dubai, are arriving at Erbil International Airport for five consecutive days this week. The first flight, with 1,515 tents, arrived on Tuesday night. Altogether, 7,200 tents will be unloaded," the press release said.

According to UNHCR’s Representative in Iraq Bruno Geddo, the agency’s goal is to secure 50,000 tents and 50,000 emergency shelter kits for Iraqi families.

Imminent Bloodbath: Daesh Takes Iraqi Families As Human Shields In Mosul
UNHCR stressed that the Mosul emergency response would cost about $196.2 million, and with these funds it would be ready to assist up to 600,000 people. However, the agency received less than a half of requires finances, and therefore, calls on donors for additional help.

A military operation to recapture Mosul from the Islamic State jihadists was launched on October 17 by Iraqi Prime Minister Haider Abadi. According to local media, about 30,000 Iraqi soldiers and 4,000 Kurdish Peshmerga fighters are taking part in the operation, with the help of airstrikes by the US-led international coalition.